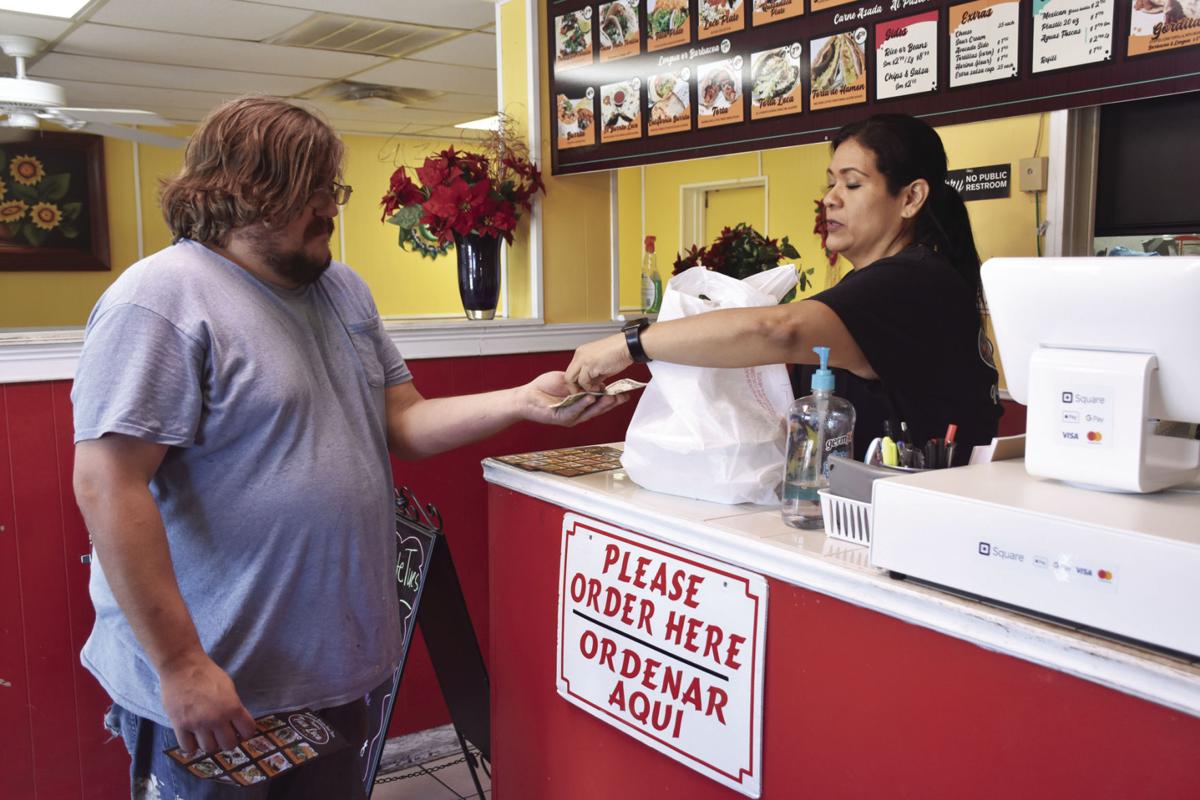 Cody Tucker, left, receives change from Taqueria Taco Loco owner Cruz Rivera after paying for a to-go order Tuesday, March 24. Rivera said she and her husband’s eatery on Grand Avenue is open for pickups as long as they are able.

Dining in at area restaurants is prohibited by orders from Cooke County Judge Jason Brinkley, Gov. Greg Abbott and Mayor Jim Goldsworthy. However, takeout and delivery orders are still allowed.

Rivera said she and her husband Santos own the the restaurant at 500 N. Grand Ave. and have been trying to get the word out that they are still open for people who have a hankering for tacos or one of their other specialties, to-go.

She said the business started seeing a decline in sales “exactly a week before” dining inside restaurants was prohibited.

“A lot has to do with people being afraid,” Rivera said of the impact they are seeing due to the new coronavirus. She also said “a lot” of people are also unemployed now and may be holding onto their money because they are uncertain about the future.

As long as the restaurant is able to stay open, it will, she said, while adding the family-owned shop is dependent on its suppliers.

“We’re doing what we can,” Rivera, a Gainesville resident, said. “We’re all in this together and if we all support each other we will make it through.”

Gainesville Area Chamber of Commerce Executive Director Morgan Tobias said the chamber has been in close contact with many of the area’s small businesses the past couple of weeks while the COVID-19 pandemic unfolds.

“Their storefronts closing doesn’t just affect the small businesses, but the whole community’s everyday life,” Tobias said. “Purchases made here in Gainesville keep your sales tax dollars in Gainesville. The more you can shop here, the more you make a small business owner do a happy dance and the more the city can provide for our residents.”

The March allocation is based on sales made in January by businesses that report tax monthly, according to a release from Hegar’s office.

City Manager Barry Sullivan said the city is still on budget for sales tax but “we are now expecting a significant decline with the current COVID-19 situation.”

He said this month’s reimbursement was “a little higher” than budgeted. However, he did say city officials were budgeting for a major slowdown in the oil industry — an industry with a big presence in Cooke County.

Sullivan said now is as good of a time as any to shop local.

“Even though people are paying sales tax with online orders those taxes in many cases are paid at the seller’s location, not the purchaser’s location,” Sullivan said. “ I encourage everyone to shop locally.”

On Friday, March 27, 2020 Charles (Chuck) Edward Richter III, 65, of Gainesville passed from this life after a lengthy illness. No formal visitation or services are planned. Chuck was born on March 7, 1955 in Camden, New Jersey to Charles Edward Richter, Jr and Florence Mary (DuPell) Richter…