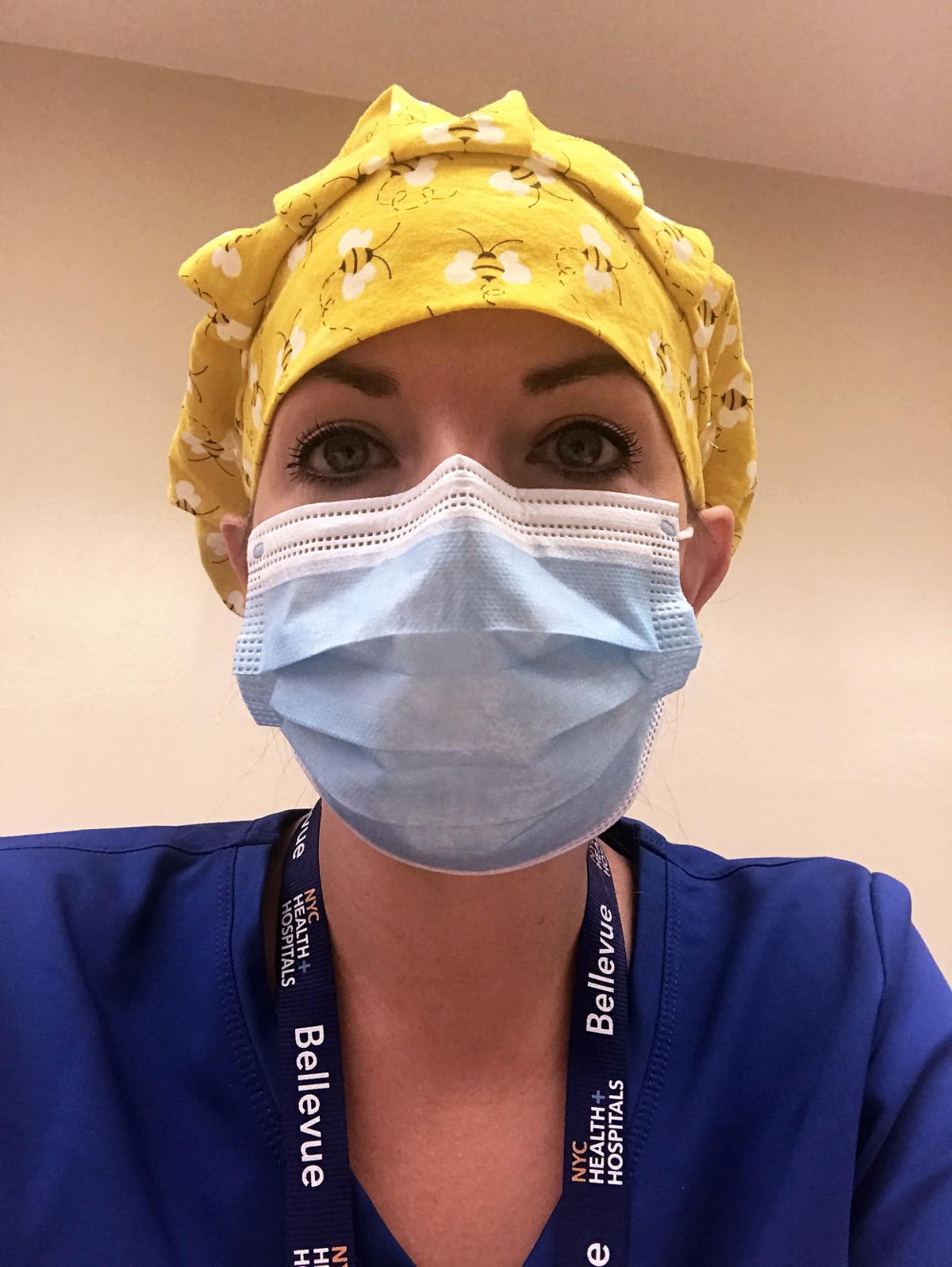 GHS graduate Courtney Waddle dons a mask for work at Bellevue Hospital in Manhattan, New York City, where she is trying to save patients hit by the nation’s most severe outbreak of the novel coronavirus. 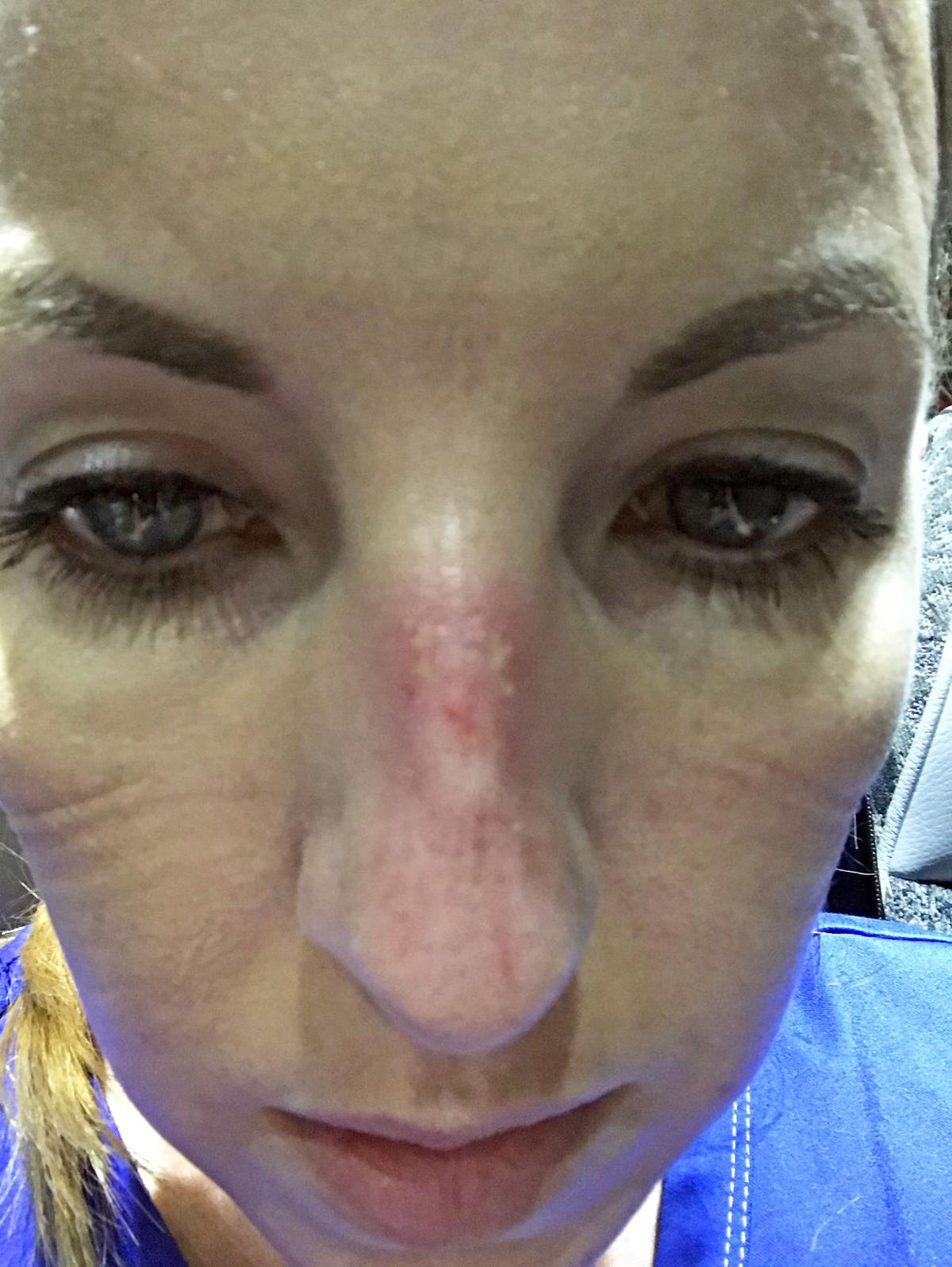 Out of work and feeling helpless, former Gainesville resident Courtney Waddle decided to put her nursing skills to use during the coronavirus pandemic by flying to the hardest-hit state in the nation — New York.

“All the nursing skills they taught you in school, that’s thrown out the window and you’re just trying to keep these patients alive” while working in the Big Apple, Waddle said during a phone interview Thursday evening, April 16, from her hotel room in New York City.

Since April 3, Waddle and four of her coworkers have been in New York, where the country’s deadliest outbreak of the novel coronavirus is centered.

As of press time Friday, April 17, there were 223,699 confirmed cases of the new coronavirus and 15,406 deaths in New York, according to Johns Hopkins University & Medicine.

Waddle said she and her fellow coworkers were furloughed from the endoscopy center they worked at in Flower Mound, which closed following Gov. Greg Abbott’s order last month stopping elective procedures.

The group of five nurses saw an opportunity to help those in New York through a staffing agency that helps with disaster relief.

“All of us decided we have nursing skills that aren’t being utilized right now so why not go up there and help,” she said. “It kind of felt worthless just sitting at home when we could be helping up here.”

Once they all got accepted, they booked a flight and made their way to New York. They’re scheduled to remain on the East Coast until April 25.

“I think there were like 15 total on our plane,” Waddle said of her flight from Love Field in Dallas to LaGuardia Airport in Queens, New York. “It was just full of doctors and nurses. Just people coming out here to help. There wasn’t anybody else.”

Two days in, Waddle got her assignment: She was heading to NYC Health + Hospitals / Bellevue in Manhattan. According to posts on Waddle’s Facebook account, Bellevue is a 1,500-bed hospital and is “the oldest public hospital in the United States,” built in 1736.

After two days of orientation, Waddle hit the ground running, covered in personal protective equipment from head to toe. While she was initially concerned with not having enough PPE, she said she is provided with a new N95 mask every day.

She said about 97% of the patients at the hospital she’s assigned to are battling the new coronavirus.

“And if they’re not COVID they are going to leave with COVID,” Waddle said. COVID-19 is the disease caused by the new coronavirus.

When she first got to the hospital, two nurses were assigned to each unit of 32 patients. Now, since more staff is arriving, Waddle cares for “four to five” patients, she said.

There’s no variation on treatment plans with coronavirus patients. The treatment plan consists of Plaquenil, Azithromycin and an antibiotic IV, according to Waddle, who now resides in Argyle with her husband.

Plaquenil is used to prevent or treat malaria caused by mosquito bites, according to WebMD. Azithromycin is used to treat a wide variety of bacterial infections.

The 2006 Gainesville High School graduate said Bellevue is getting overrun because it is taking transfers from overcrowded hospitals.

Waddle said there is a “makeshift” intensive care unit on each floor and nearly all patients have some type of respiratory mask on to help with breathing. Those in the ICU are intubated, she said.

She said Thursday that she hasn’t had a patient die on her yet, but she did have to take two patients to the ICU Wednesday, April 15. One man had to be revived and intubated.

“I don’t know how he’s doing. If he made it or not. It’s crazy how fast these people go down,” Waddle said. “It’s unreal how fast somebody can be here and then they’re not.”

She described how one of her patients was getting up and going to the bathroom on his own without oxygen and the next day “they were trying every intervention on this guy and then the next day he was up in the ICU on a ventilator.”

“It’s all of a sudden,” Waddle said of how the virus worsens.

Waddle also said about 70% of the patients are men, with most in their 50s and 60s. She said she didn’t have an exact number of patients being treated at Bellevue.

And, while she doesn’t know the death rate at Bellevue, she did say there were 12 18-wheeler “refrigerated morgues” on site on April 5.

“They’ve already filled those up and they’ve moved more in,” Waddle said. “They don’t pull codes anymore just because there’s so many.”

The new coronavirus is not to be taken lightly, she said.

Waddle said she’s worked on various floors at the hospital and described seeing so many people on ventilators as “crazy.”

“It was eerily quiet,” Waddle said of the ICU. “It made me scared. We don’t need to have this in Texas.”

She said some people back home have an “it won’t happen to me attitude.”

“But they’re not seeing what could potentially happen,” she said. “People are so put out by not being able to work or go out to dinner at a restaurant when people up here are dying left and right.”

Waddle recommends Texans think twice before pushing ahead to go out.

“Better safe than sorry is my take on it,” she said. “Stay home, wash your hands, wear a mask.”