The history of Gainesville is about to become even more accessible after the Cooke County Library was awarded a $25,000 grant this month to digitize copies of the Gainesville Daily Register.

The 2021 TexTreasures grant covers digitizing, hosting and providing access to 24,175 pages of the Register from January 1915 to December 1923, according to grant application documents. Currently, the archives are on microfilm at the library.

“Microfilm is not an easy thing to look at … ,” Cooke County Library Director Jennifer Johnson-Spence said of why she applied for the grant. “I just felt that we needed to have more of the Register online for people to be able to see so that they could do the research themselves from wherever they’re at.”

The library partnered with the Digital Libraries-Newspaper Team at University of North Texas Libraries in Denton when applying for the competitive grant from the Texas State Library and Archives Commission, according to Johnson-Spence. Members of the Cooke County Commissioners’ Court unanimously approved accepting the grant on Monday, Aug. 24.

According to a press release sent by Johnson-Spence, the plan is to have 25% of the 1915-1923 issues available by the end of this year on the University of North Texas Libraries’ Portal to Texas History’s Texas Digital Newspaper website. The project is supposed to be complete by the end of August 2021.

Johnson-Spence said the library’s plan is to have a blog to document the process as it happens. 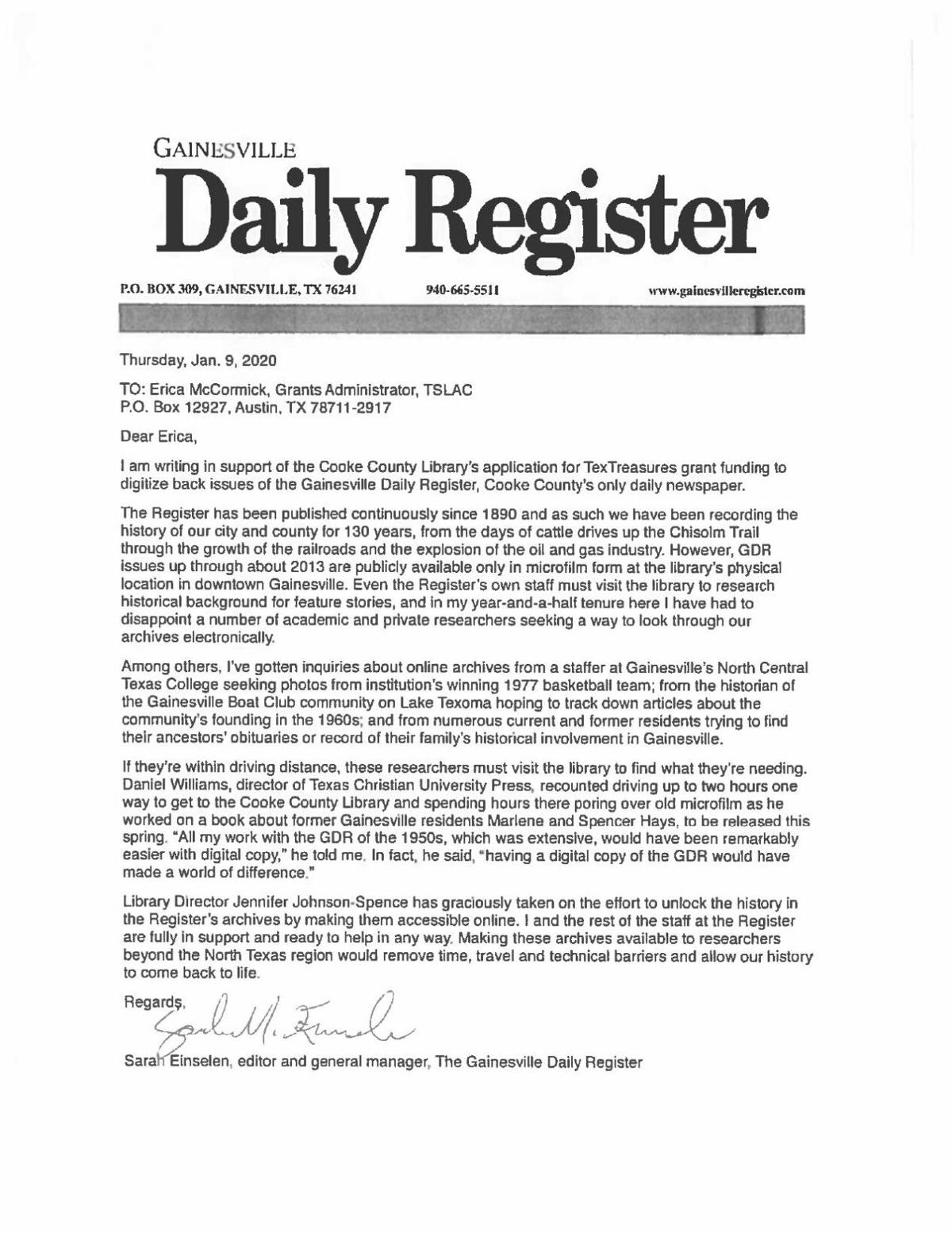 She said she started working on applying for the grant last fall and submitted it Feb. 20. She received five letters of support to send along with the application from the Morton Museum of Cooke County, KGAF, North Central Texas College, the Register and the director of Texas Christian University Press.

She said the grant review panel had 15 proposed recommendations out of 18 who applied for the specific TexTreasures grant the library received. Recommendations were announced in June, but they still had to be voted on by the Texas State Library and Archives Commission this month.

Working on digitizing copies of the Register was something Johnson-Spence said she has been wanting to do for a while to help preserve Cooke County history. She also said she wanted to start with the oldest issues first.

The Cooke County Library has issues of the Register on 475 rolls of microfilm from January 1915 to December 2015.

“There’s a gap of 99 years that you cannot find electronically but can only be found on microfilm here,” Johnson-Spence said.

She said she thinks having older copies of the Register available at one’s fingertips will make a “big difference.”

“I think it allows people to personally have access to things that are important to the history,” she said.

While the TexTreasures grant can only be awarded to the same library three years in a row, Johnson-Spence says she is hopeful to continue digitizing Register archives.

“Probably next year I will look at stuff around the Camp Howze era because those years are really sought after,” she said.

130 YEARS: Preserving memories: Community looks back on decades of the Register's publication

If there’s anyone who knows the Register’s history, it’s Joe Grotte.