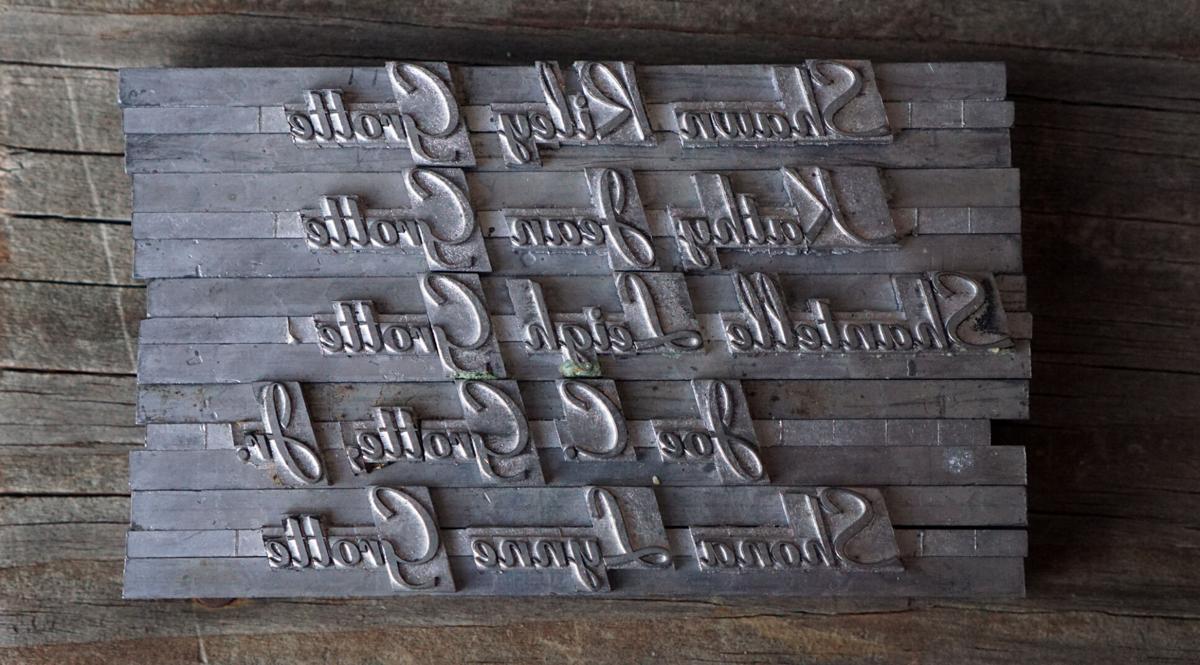 Pieces of Register history include Joe Grotte’s name and those of his family members in hot metal type. He created the mementos after the newspaper upgraded in the 1970s to photographic paper used in offset printing. 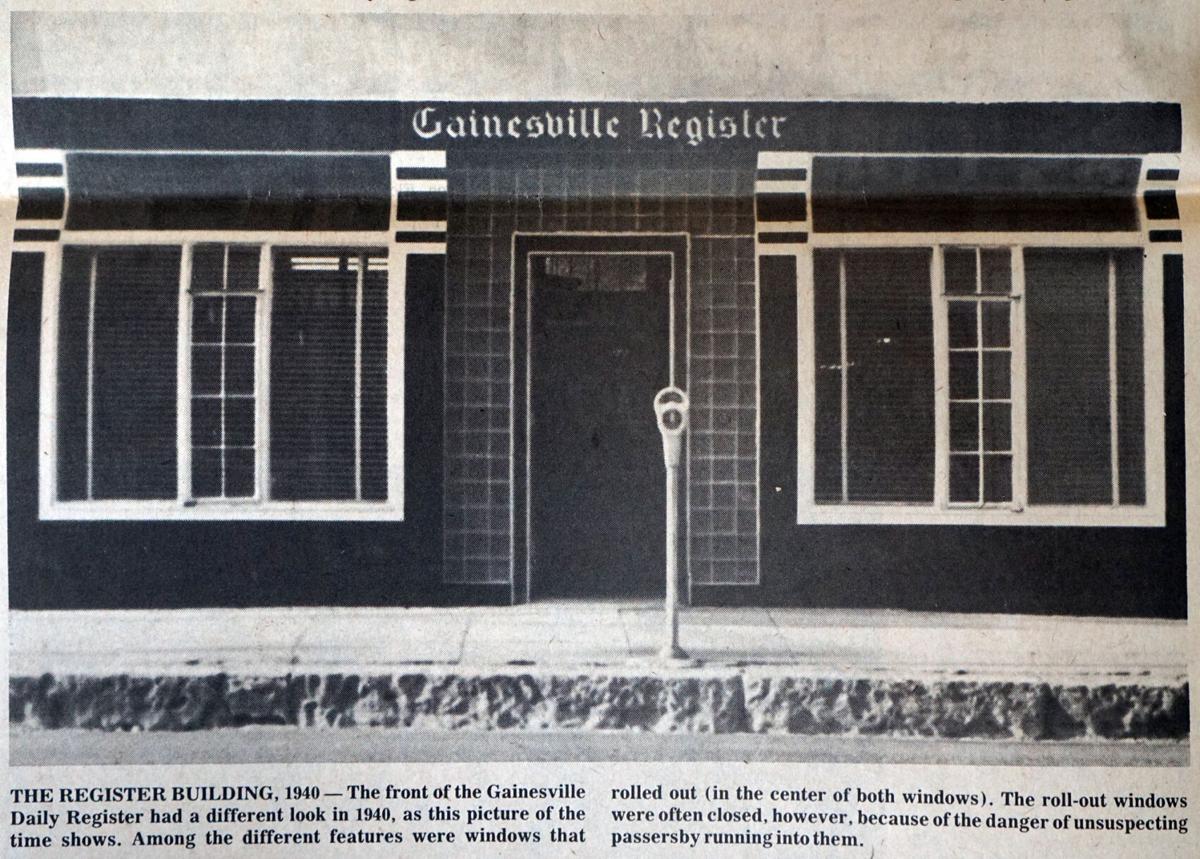 The front of the Gainesville Daily Register's office as it looked in 1940. 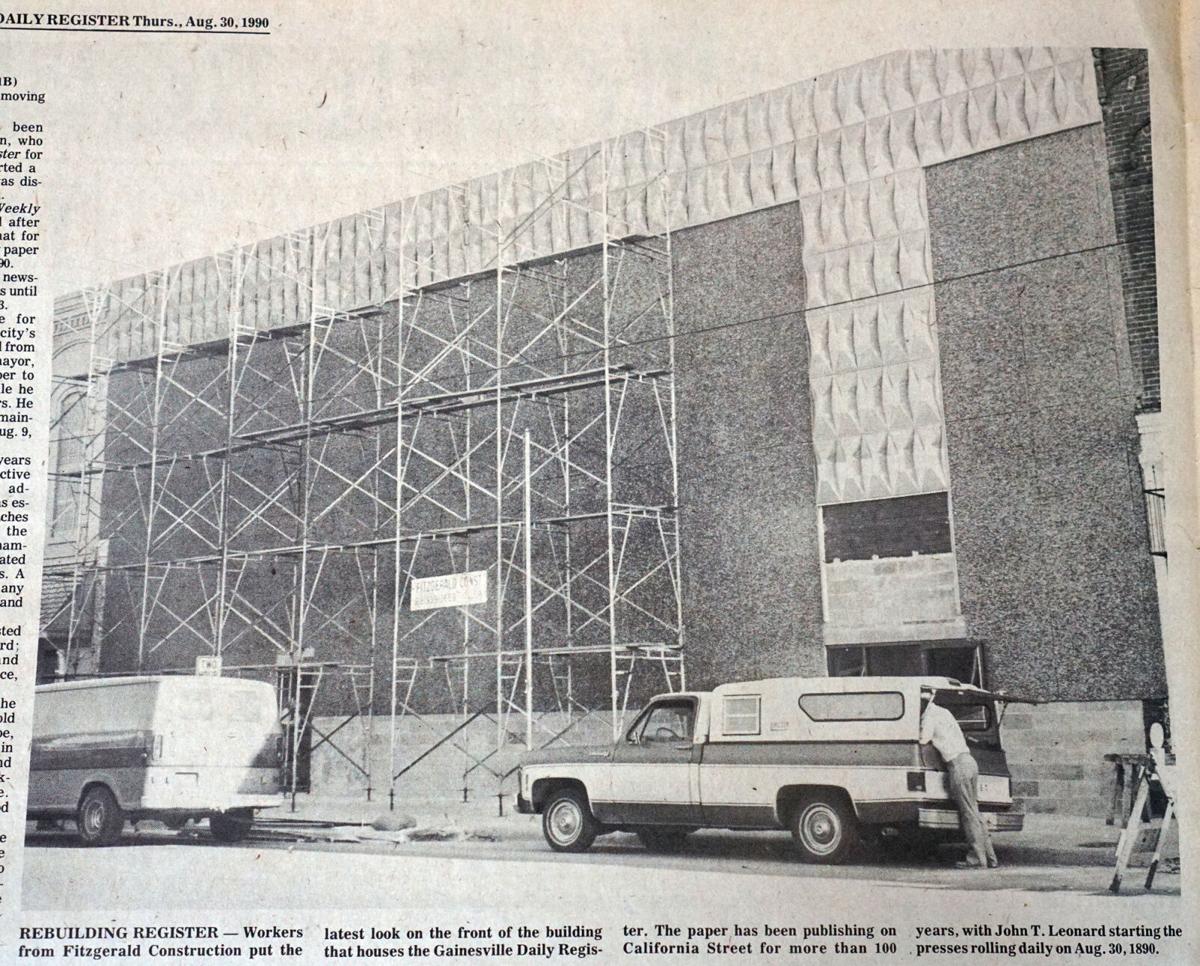 Construction workers put up a facade on the Register’s building after its purchase in 1973 by Donrey Media. 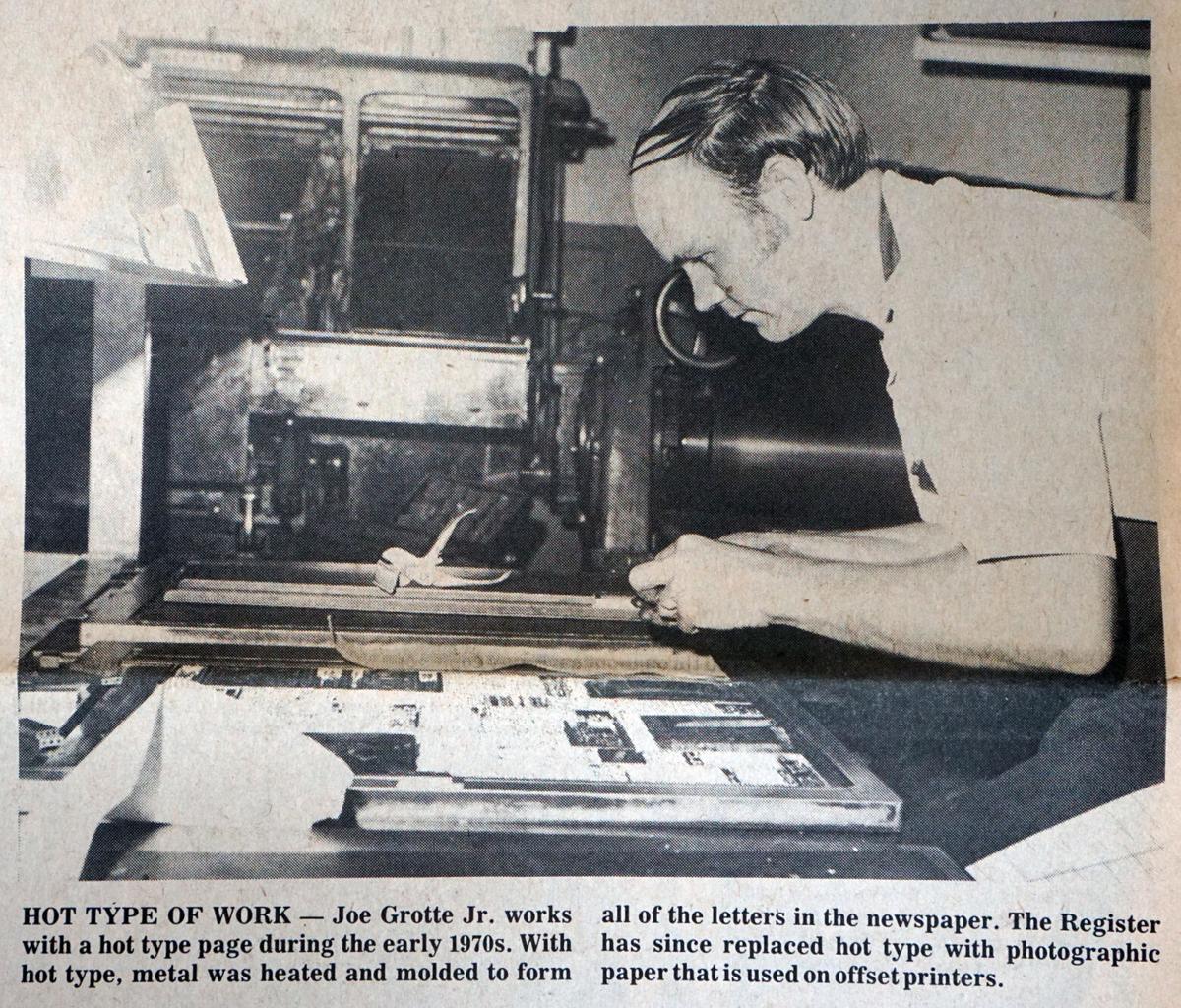 Joe Grotte works with a hot type page in the early 1970s. 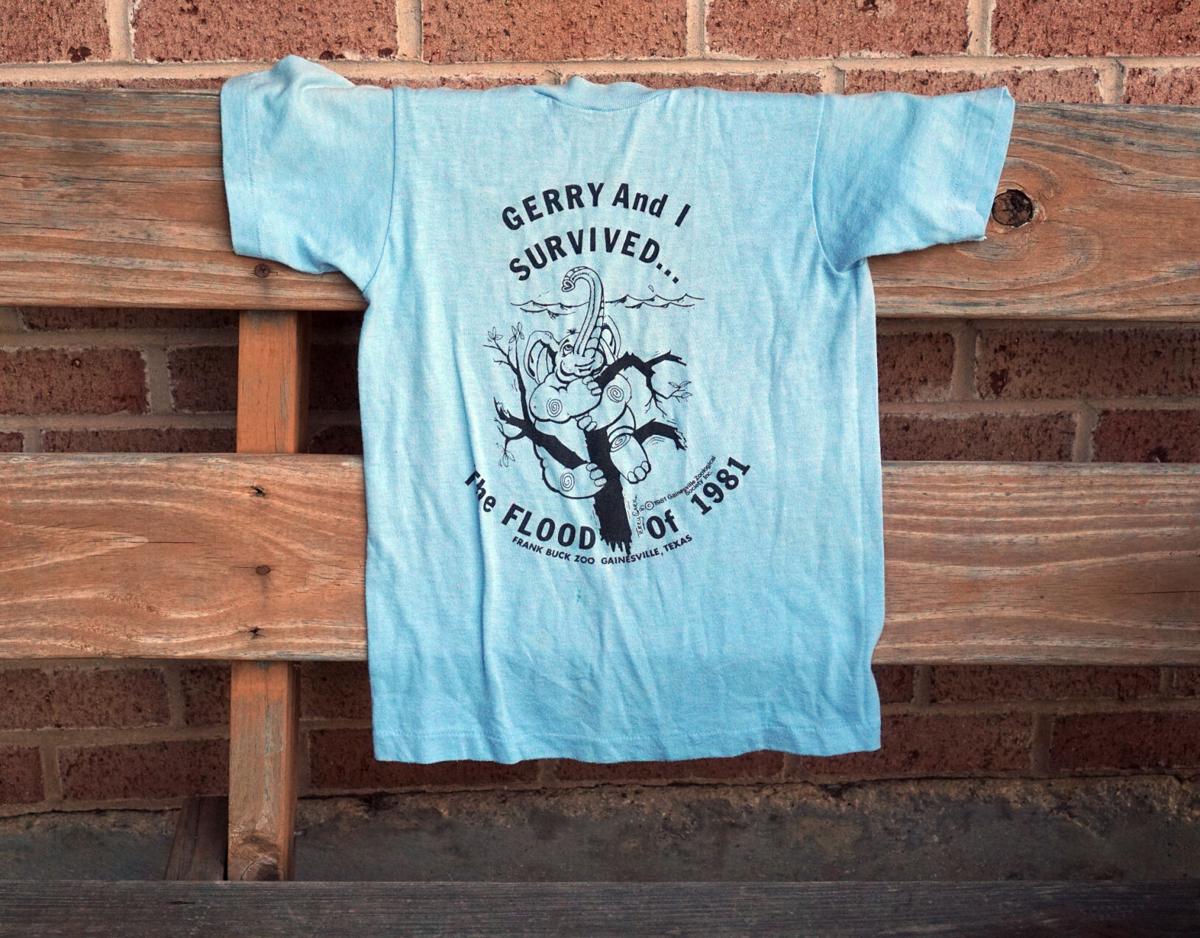 A T-shirt designed by Register camera room staffer Terry Clark to commemorate a major flood in 1981. 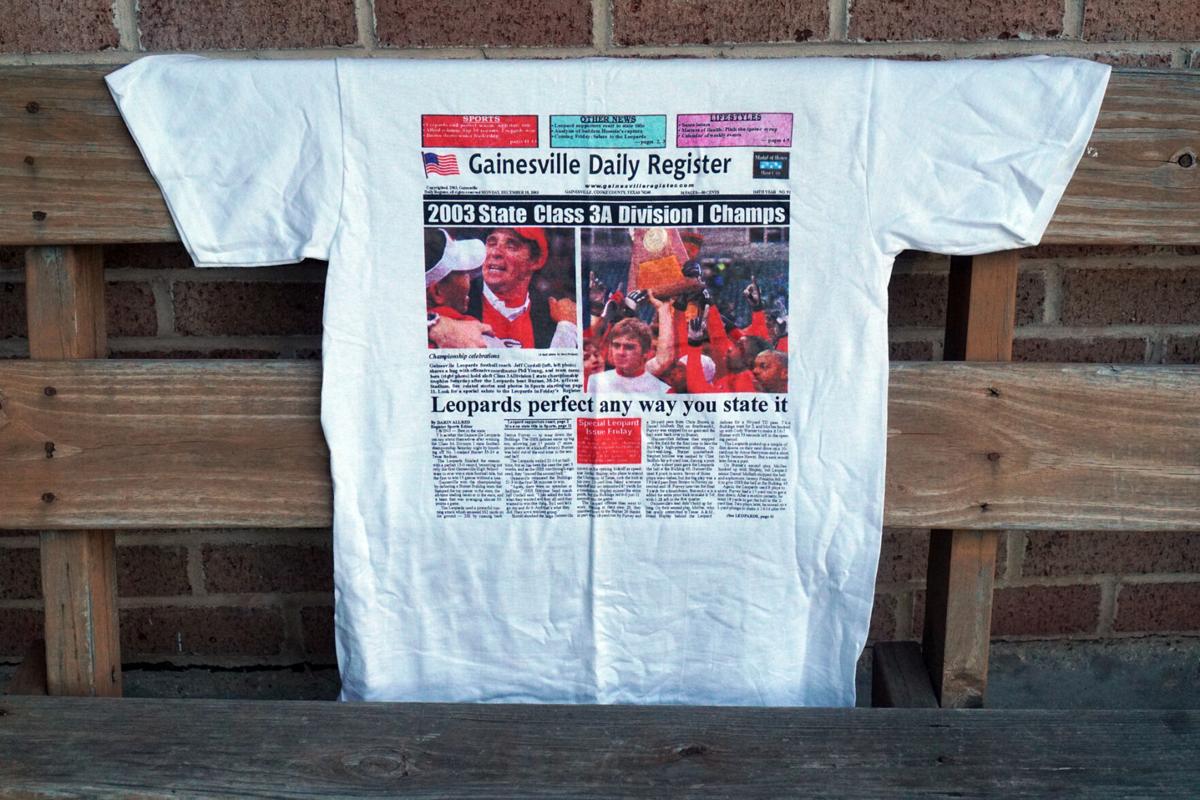 If there’s anyone who knows the Register’s history, it’s Joe Grotte.

Grotte, 77, reflected this week on his career with the Register, which on Sunday, Aug. 30, will hit its 130th anniversary. Grotte’s decades-long newspaper career beginning as a paperboy spans almost half the Register’s existence as a daily newspaper.

The newspaper’s history as a daily publication starts with John T. Leonard, who purchased the Weekly Register in January 1890 and published the first copy of the Gainesville Daily Register on the afternoon of Aug. 30, 1890, from the same building where the Register still operates today. Leonard would go on to become mayor of Gainesville from 1901-1909 and his family continued to publish the newspaper until 1973, when it was sold to Donrey Media Group. The Register’s current owner, Montgomery, Alabama-based CNHI, acquired the newspaper in 1998.

“It is an honor to be a part of The Register which has had an important role in this community for so many years,” Publisher Lisa Chappell said. “Gainesville is lucky to have a newspaper based on quality journalism. We take our role in this community very seriously and we are proud to say that we reaching more people now than we ever have thanks to technology.”

“A lot has changed in 130 years, but the Gainesville Daily Register continues to be a great source for local news for many residents of Cooke County,” Brinkley said. “I wish them many, many more years of continued success.”

Grotte, who still lives in Gainesville and now works as a custodian at W.E. Chalmers Elementary School, first got involved with the Register about 65 years ago when it was under the Leonard family’s ownership. He started delivering the paper at 11 years old and went on to take a full-time job in the newspaper’s composing room in 1963, shortly before President John F. Kennedy was shot.

Although early in his newspaper career, Nov. 22, 1963, was the most memorable day of it, Grotte said.

“The editor was actually down in Dallas,” he recalled this week. “The man that was in charge, I still remember this, he came in the door where we were working, and he said, ‘John Kennedy just got shot.’ Well we hadn’t put the paper out yet — we hadn’t reached the deadline — so we got to shuffling around.”

Grotte worked for decades in the composing room, where he took text and photos from the advertising and editorial departments and laid it out as it would look when printed. That day in November, “I got some real big wood type and we put ‘KENNEDY ASSASSINATED,’” he recalled. “I wish I still had one of those papers.”

Grotte recalled bringing his children to the Register’s second floor to watch the city’s Christmas parades from the upstairs windows. The building’s current facade covering those windows was put up after the newspaper’s ownership change in 1973, he said, and that same year, the newspaper upgraded from hot metal typesetting to photographic paper used in the offset printing press on site at the Register. The Goss Community 24-page full color offset press printed millions of newspapers over the years.

“I was used to the old hot metal, and I came home and told my wife, I don’t know if I can do this,” he recalled of the transition away from the old typesetting technology. “And gosh, it was a lot easier... it was just wonderful, afterwards.”

The Register barely escaped damage during a major flood in 1981 which made Frank Buck Zoo’s elephant Gerry II famous. Grotte and the rest of the Register’s staff were stuck at work for some time as flooding reached nearly to the newspaper’s building on the west and up to the railroad tracks to the east. Gerry II was presumed dead along with some of the zoo’s other animals, but after the pachyderm was found to have survived stuck in a tree along the Elm Fork of the Trinity River, one of the Register’s camera room staff members, Terry Clark, illustrated Gerry’s ordeal with a cartoon that wound up on T-shirts the Register sold.

After CNHI acquired the newspaper, more change came — Grotte learned to use computers to lay out pages. The Gainesville Daily Register was printed six days a week for most of Grotte’s career, but it entered the digital age with its first website in the late 1990s. However, it remained an afternoon publication into the 2000s, which turned out to be an advantage on Sept. 11, 2001, when terrorists brought down the Twin Towers of the World Trade Center, Grotte recalled.

“I was going to work that morning, and we had the TV on, and my wife said ‘look at that,’ when the first one hit. I said, golly,” drawing out the word’s two syllables, he recalled of learning an airplane had been flown into the Twin Towers.

He knew he had work to do after news broke of the second plane to hit the World Trade Center.

“The Dallas Morning News and all of those, the paper had already come out,” Grotte recalled. “The Gainesville Register had a later deadline. The Gainesville paper basically scooped it because most papers, as you know, were in the morning. And we had around a noon deadline.”

As a result, he said, the day’s edition had photos and coverage of the tragedy long before the region’s larger newspapers published it the next morning.

The Register is the area’s newspaper of record for local happenings, too, like the Gainesville Leopard football team’s 2003 state championship win which covered the front page of the Dec. 15 edition that year. The front page was also reproduced on T-shirts, one of which Grotte still has.

Grotte worked another decade in the Register’s composing room before retiring in July 2011. The Register’s in-house press was decommissioned in October that year and the paper is now printed at Texoma Web Offset in Gainesville. The press equipment was dismantled and removed in 2019.

Today, multimedia news and sports coverage is posted daily to the Register’s website and delivered to subscribers via email and social media ahead of the print edition’s distribution in the mail on Tuesdays, Thursdays and Saturdays. The Cooke County Library is leading an effort to make the library’s microfilm archives of the Register available on the internet, too.

“We continue to grow and change with the times so that Cooke County will have a community news source for many years to come,” Chappell, the Register’s publisher, said. “Thank you Gainesville for supporting local journalism. It matters.”