On Thursday, Aug. 27, the city entered an agreement with the United Daughters of the Confederacy to remove the Confederate monument from the park and take it “within reasonable distance” to a location selected by the UDC, the signed agreement shows. The agreement states the UDC must provide the Morton Museum of Cooke County in downtown Gainesville the first right of refusal to take the more than 100-year-old statue. 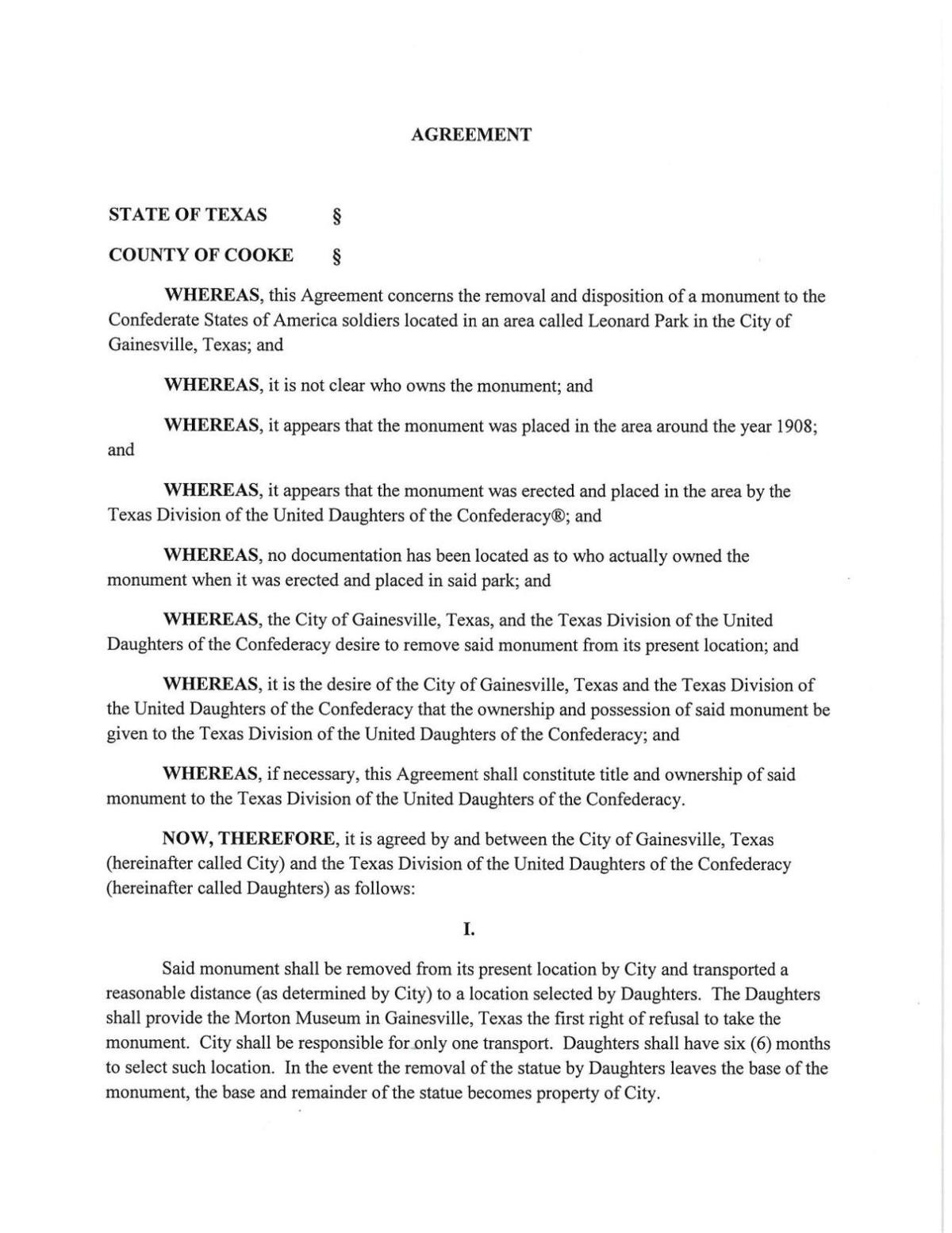 At an Aug. 18 board meeting at the museum, 210 S. Dixon St., Cooke County Heritage Society President Elaine McHorse told board members that its membership had to vote on possible acquisition of the monument and Gainesville Fire-Rescue's Station No. 3 at 115 E. Pecan St. before the board could do anything else.

The CCHS established the Morton Museum and oversees its operations.

Postcards were mailed with for or against on them, McHorse said. Of its more than 200 members, more than 120 returned the postcards to the museum to be canvassed for a vote. A total of 118 members supported taking control of the Confederate statue and old fire station.

“This does not bind us to one single thing,” McHorse said after the votes were canvassed. “All it says is that we will accept the fire station and we will accept the monument if the city and the UDC, the United Daughters of the Confederacy, if they … see fit to give that to us.”

She said the museum is a nonprofit organization and they do not purchase property. There will be other meetings where they will discuss things further, McHorse said.

City Manager Barry Sullivan said the fire station decision is up to members of the city council. The monument, he said, is part of the agreement with the UDC.

Members of the city council agreed Tuesday, July 14, to have Sullivan work up a contract to give the Confederate monument to the UDC to maintain and preserve the statue and its historical value in another location.

At the July 14 specially called meeting, Sullivan told council members there is no record in meeting minutes from the early 1900s that indicates the city owns the statue.

In the agreement signed last week, it states that should the city learn it's the owner of the statue, the city transfers and donates it to the UDC.

The statue is inscribed with “Our heroes” and “Confederate.” It was erected Feb. 15, 1908, by the Gainesville-based Lou Dougherty Chapter No. 366 Daughters of the Confederacy, according to the inscription.

The agreement signed last week between the city and the UDC states the city only has to move the Confederate statue once. The agreement also states “in the event the removal of the statue by Daughters leaves the base of the monument, the base and remainder of the statue becomes property of the city.”

Sullivan said he's budgeted $30,000 from the city's Hotel Occupancy Tax Fund for the monument removal project should the Morton Museum accept the statue. Of that, $17,400 is for actually moving the Confederate monument, he said.

The remaining $12,600 is “not a hard number” but the city wanted something in the budget to “let people know that there will be additional funds used to help pay for the display of the monument,” according to Sullivan.

Hotel/motel occupancy tax revenues must be spent on promoting tourism, per state law.

The UDC has six months to choose where they want to move the statue, the agreement shows.