After a lengthy selection process, members of the Cooke County Commissioners' Court have decided to shell out $4.5 million to upgrade the county's radio system used by first responders.

The court unanimously agreed to a proposal from Dallas-based Motorola Solutions Inc for $4,480,673 on Monday, Dec. 28, 2020, according to Cooke County Judge Jason Brinkley. Precinct 2 Commissioner Jason Snuggs was absent.

The price reflects a $100,000 discount since the county agreed to include maintenance for years 2-5, Brinkley said.

Motorola's proposal includes a four-site system design to upgrade Cooke County’s current radio communications. Each site consists of three conventional VHF radio channels and three digital 700MHz P25 trunked channels to connect to a regional system; 100 new dual-band digital radios for use on the trunked channels; and five years of maintenance, according to the proposal. 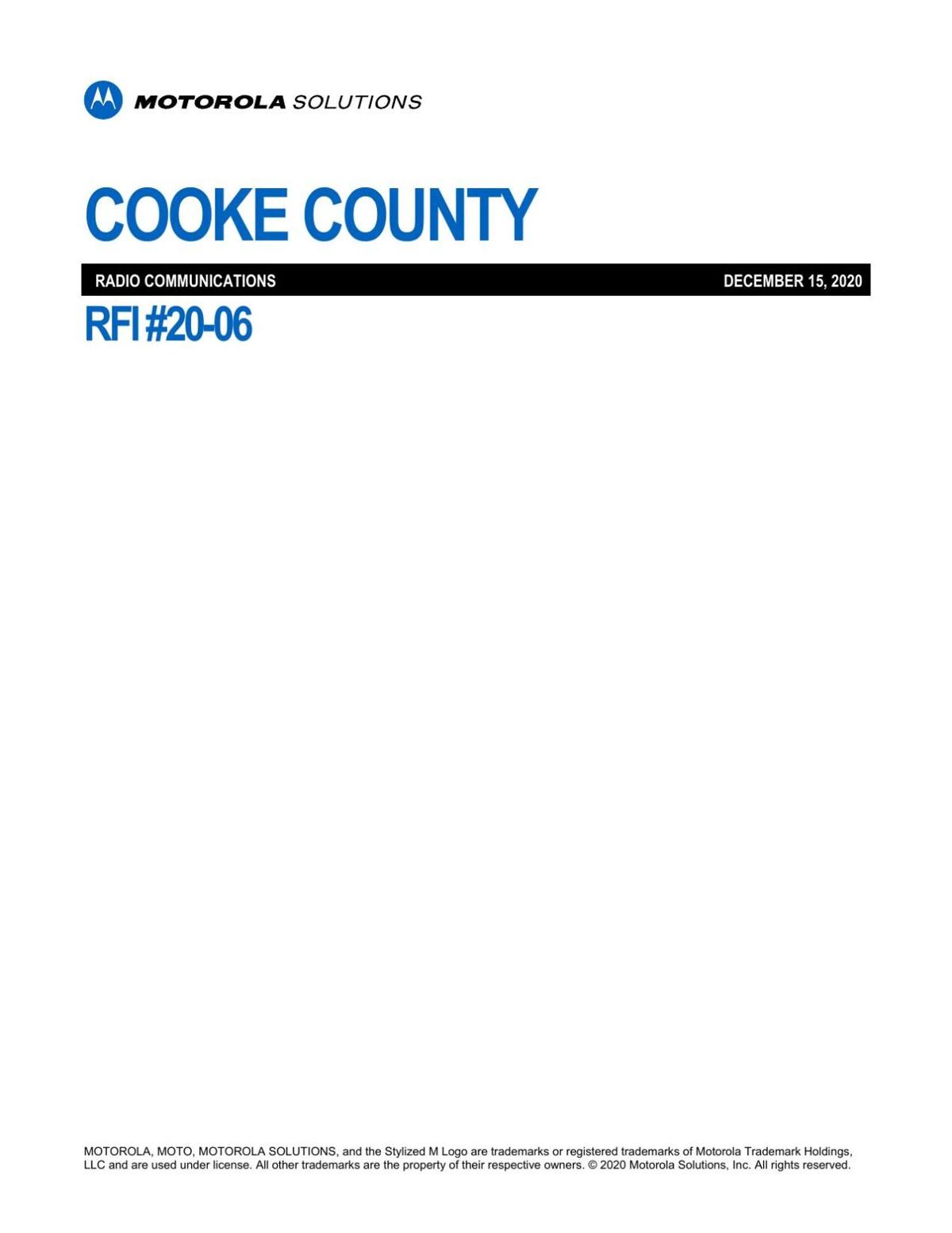 Trunked systems use digital technology to accommodate many more users than a conventional system on the same number of channels.

Precinct 1 Commissioner Gary Hollowell said Dec. 28 that there was some “misinformation floating out there” about the radio upgrade.

“Right now, we are adding two additional towers to what is our current setup,” Brinkley said. “ … The way that fire departments… are currently operating will still be operating that way going forward with additional coverage.”

The county currently has two radio tower sites — one in town on Rice Avenue and one at PenTex Energy on West U.S. 82 in Muenster, according to a previous Register report.

The two additional locations would be in Walnut Bend and Sivells Bend, county officials said.

Brinkley said the county is also implementing a 700MHz trunked system for law enforcement. Eventually, all departments can be on that system, he said.

“So there will be concurrent systems in place,” Brinkley said.

Law enforcement will be provided with dual-band radios, according to Hollowell.

“I see this having absolutely no negative effect on our volunteer firefighters,” Hollowell said.

Precinct 4 Commissioner Leon Klement said they are not forcing anyone to go to a 700MHz system.

“If they so choose later, the capability will exist and it will enhance their communications probably even more,” Hollowell said. “But we're not strong-arming anybody or taking advantage of anybody nor are we leaving anybody without coverage.”

Brinkley said two companies submitted proposals that met the criteria for the county's communications upgrade — Motorola and L3Harris Technologies Inc. A third submission, from Self Radio, did not meet criteria.

The communications upgrade project, Brinkley said, will likely be finished later this year.

Commissioners have been talking about upgrading the county's radio communications for three years, officials have said.

In 2018, commissioners agreed to hire Trott Communications to conduct a communications study to show the county where its current coverage extends, according to a previous Register report. Following the study, Trott helped design a system “to increase our coverage to over 95% of Cooke County on a handheld radio,” Brinkley previously said. That was phase two. Phase three, according to Brinkley, was the RFP process.

So far the county has spent $56,957 for all three phases, including $7,471 to Mission Critical Partners to review the submitted proposals, according to Brinkley and County Auditor Shelly Atteberry.