Protesters and others hoping to display signs on county property need to look elsewhere.

According to the order, which is effective immediately, “a person or persons may not cause or authorize any signs, symbols, structures, contrivances or devices to be placed, installed, affixed or maintained on or over county property including the placement or installation of any signs, structures, contrivances, devices used for commercial or noncommercial purposes, except for items approved by the commissioners’ court.” 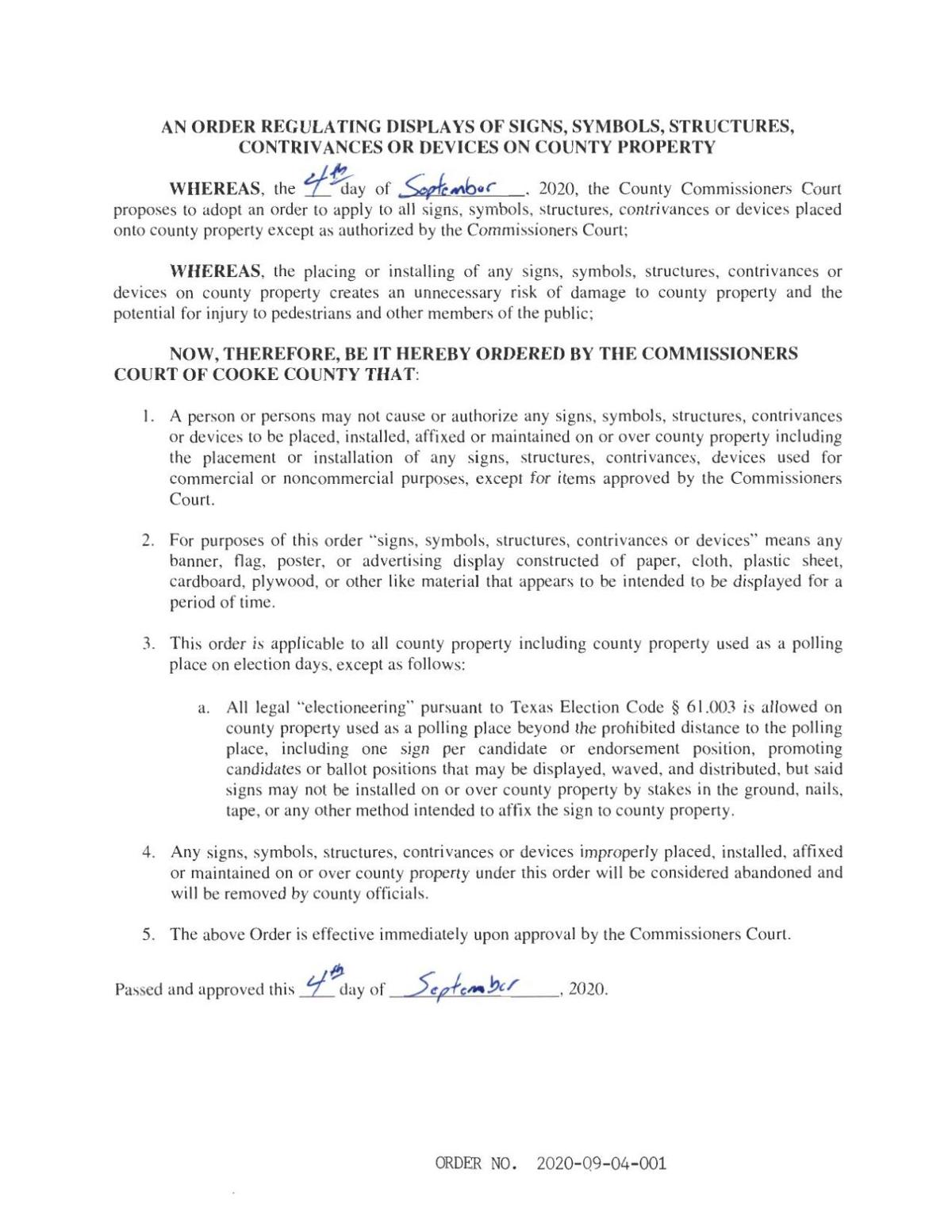 The order states that signs, symbols, structures, contrivances or devices are described as any banner, flag, poster or advertising display constructed of paper, cloth, plastic sheet, cardboard, plywood or other like material that appears to be intended to be displayed for a period of time.

Cooke County Judge Jason Brinkley said Friday after the vote that the county has “had some internal conversations about needing to formalize a policy, but the events of this past weekend and the call for a special election for later this month prompted the action today [Friday].”

PRO Gainesville brought a display with nooses to its Sunday, Aug. 30, protest.

The Gainesville-based activist group has been calling since June for the removal of the Confederate Soldiers and Sailors Monument that stands on the northeast corner of the Cooke County Courthouse. Last month, members of the commissioners’ court voted 4-1 to keep the statue where it is. Brinkley voted against. He wanted to have a nonbinding referendum placed on the Nov. 3 ballot.

The special election Brinkley refers to was called by Gov. Greg Abbott to fill Sen. Pat Fallon’s Texas Senate District 30 seat. Fallon, R-Prosper, received the Republican nomination for the 4th Congressional District in the U.S. House of Representatives last month, which leaves his current state seat open. Six candidates are signed up for the Sept. 29 special election, including Muenster’s own Drew Springer, a republican state representative.

Brinkley said the order was needed because the county has seen an increase in the number of displays and signs being placed on county property in the past few months.

“Historically, individuals and organizations have asked commissioners’ court for permission before making such placements; however, we never had a formal policy regarding the issue,” Brinkley said. “With upcoming elections and continued weekend demonstrations, the lack of a policy has caused and is causing confusion as well as potential harm to county property.”

He said his office has not received any formal request to place anything on county property since the demonstrations began.

Any signs, symbols, structures, contrivances or devices improperly placed on county property under the order will be considered abandoned and will be removed by county officials, the policy states.