Weekdays from 8 a.m. to 6 p.m., registered voters can choose one of six candidates on the ballot — five Republicans and one Democrat — inside the courtroom of the Cooke County Courthouse Annex, 112 S. Dixon St. Early voting ends Sept. 25. 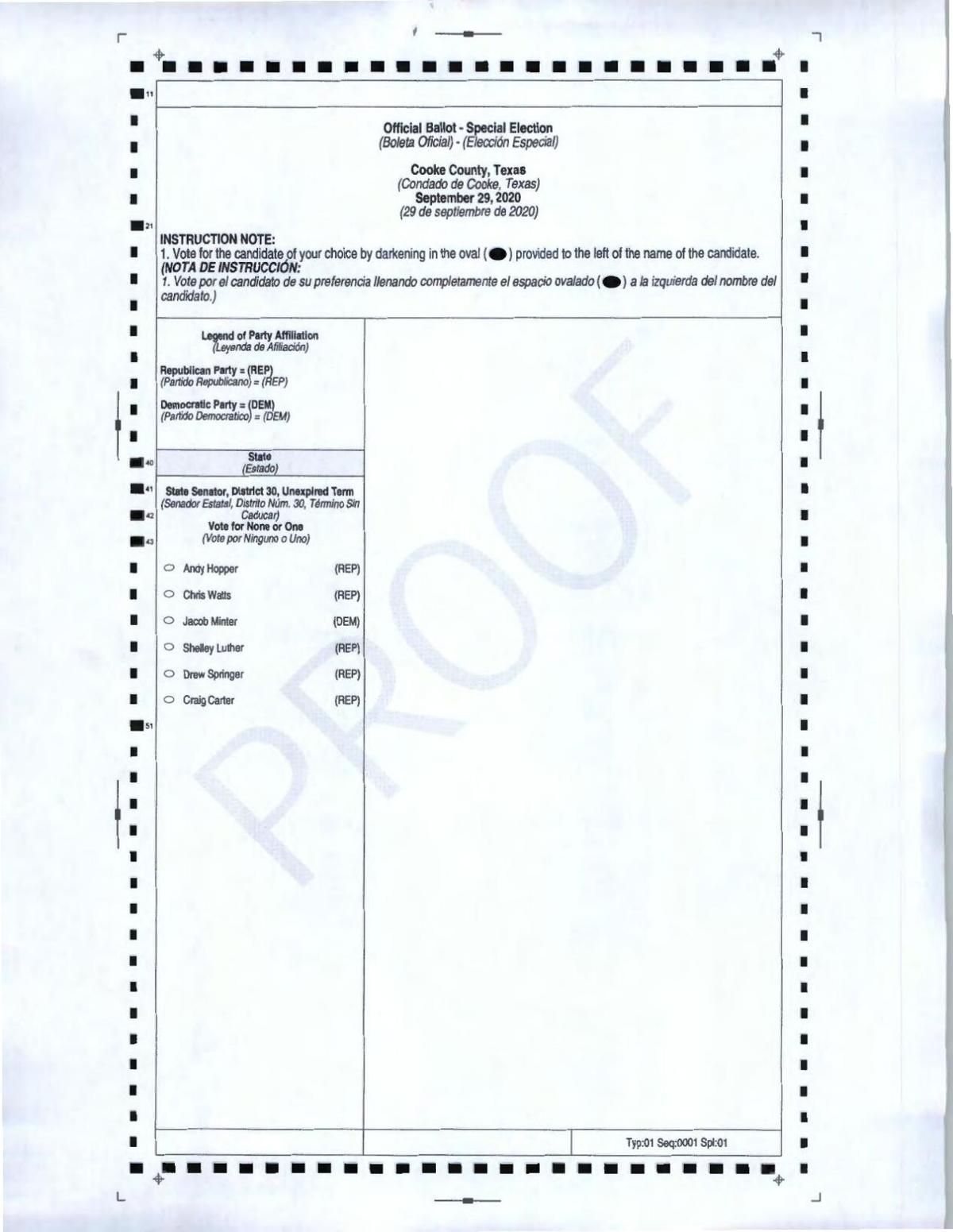 Last month, Fallon, R-Prosper, received the Republican nomination for the 4th Congressional District in the U.S. House of Representatives, leaving his current state seat open. Fallon is replacing John Ratcliffe, R-Heath, on the November ballot after Ratcliffe was named the director of national intelligence.

Harrison said poll workers will be taking extra precautions and sanitizing as much as possible to help slow the spread of the coronavirus.

She also said wearing masks to vote is encouraged, but she cannot make someone do so. Should someone show up to the polls without a mask and they feel more comfortable wearing one, they can get one from an election worker, according to Harrison.

Voters are asked to use hand sanitizer when they come in, as well.

Harrison said Thursday morning, Sept. 10, that her office is busy sending out the last of the ballots by mail for the special election and those should be hitting mailboxes soon.

“A lot of voters, because they hit annual on their application, they may not even realize they’re going to get this ballot,” Harrison said. “Don’t be alarmed that your president is not on it because this is a special election.”

Harrison estimated 725 ballots for the special election will be sent out. The last day an application for a ballot by mail can be received is Friday, Sept. 18.

Harrison also wants to remind voters that if they feel more comfortable walking their ballot in instead of using the mail, they can, but it has to be walked in to her office inside the Cooke County Courthouse, 101 S. Dixon St., only on Election Day, Sept. 29.

“Only you the voter can drop it off, no one else,” she said.

All ballots by mail must be received by Election Day in order for them to be counted, according to Harrison.

As of Thursday afternoon, there were 26,583 people registered to vote in Cooke County, according to Brandy Carr, the county’s voter registrar.

With the exception of the U.S. citizenship certificate, which does not expire, the acceptable photo ID must be current or, for voters aged 18-69, have expired no more than four years before being presented for voter qualification at the polling place.

Allowable supporting documentation are: a government document that shows the voter’s name and an address, including the voter’s voter registration certificate; a current utility bill; a bank statement; a government check; a paycheck; a certified domestic birth certificate; or a document confirming birth admissible in a court of law which establishes the voter’s identity, which may include a foreign birth document.

If a voter meets those requirements and is otherwise eligible to vote, the voter will be able to cast a regular ballot in the election.

Voters can check their registration status on the secretary of state’s website at https://teamrv-mvp.sos.texas.gov/MVP/mvp.do.

GOP hopefuls face off: 5 out of 6 candidates for SD-30 speak out at Republican forum