The question of whether or not to keep the Confederate Soldiers and Sailors Monument on Cooke County Courthouse grounds might end up on the November ballot.

Cooke County Judge Jason Brinkley said Thursday, Aug. 6, that he would recommend calling for a referendum on what has been a contentious issue among area residents.

“I have received more emails and phone calls on this issue than any other,” Brinkley told the Register in an email interview. “And I think the best way to ensure that everybody gets [to] voice their opinion is to put it to the public [by a] nonbinding referendum. I hear those that are shouting loudest on each side, but I think we need to hear from the silent majority of Cooke County residents on this.”

Brinkley’s recommendation would come before members of the Cooke County Commissioners’ Court during a specially called meeting at 10 a.m. Monday, Aug. 17, inside the Commissioners’ Courtroom at the Cooke County Courthouse, 101 S. Dixon St. The only topic on the meeting’s agenda is the Confederate monument. Public comment is limited to one hour, double the regular 30-minute cap.

It also states “the commissioners court of a county with a population of less than 40,000 may order a nonbinding referendum in the county on any matter affecting county property.”

Harrison said Friday, Aug. 7, that the filing deadline to get on the Nov. 3 ballot is the 78th day before the election. Aug. 17 marks the 78th day, she said.

The referendum works as a poll and members of the court have the final say on what to do with the monument.

Brinkley said he is only one vote and the nonbinding referendum is his preference. He cannot speak for the commissioners, he said.

The Register asked each commissioner for their thoughts after Brinkley called for the vote on social media Thursday. As of press time, only two responded.

Precinct 1 Cooke County Commissioner Gary Hollowell said he was “holding off” on comment until he receives “some additional input.”

Precinct 2 Cooke County Commissioner Jason Snuggs said he and the other members of the court have been facing a lot of situations, such as the coronavirus pandemic, that other elected officials haven’t had to handle.

“I have welcomed wishes and opinions of all county residents for approximately nine weeks now,” Snuggs said of being hit with the statue issue during budget season.

He also said the monument issue is something he has been willing to push out for a vote from the start.

“There is not a choice to make everyone happy,” Snuggs said. “I will still be called names and disrespected by individuals with differing opinions but letting the public speak seems to be a great option. No matter someone’s view on this topic, I wish residents would take a few steps in our shoes before they are so quick to judge.”

PRO Gainesville, a Gainesville-based group, has held four protests calling for the removal of the Confederate Soldiers and Sailors Monument since July 1. A fifth protest is planned Sunday evening. Protesters gathered Monday, Aug. 3, to support the monument in place and have also counter-protested at Pro Gainesville’s protests.

The Confederate Soldiers and Sailors Monument is a 30-foot-tall stone monument with an inscription spanning the four sides of the base.

The inscription is sourced from a poem dedicated to Robert E. Lee and reads in part: “Oh, home of tears but let her hear / This blazoned to the end of time; / No nation rose so white and fair / None fell so pure of crime.”

It was placed on courthouse grounds in October 1911 primarily due to the influence of former Confederate Navy officer A.J. Meriwether, according to Cooke County historian Ron Melugin. Meriwether is buried in Gainesville’s Fairview Cemetery. 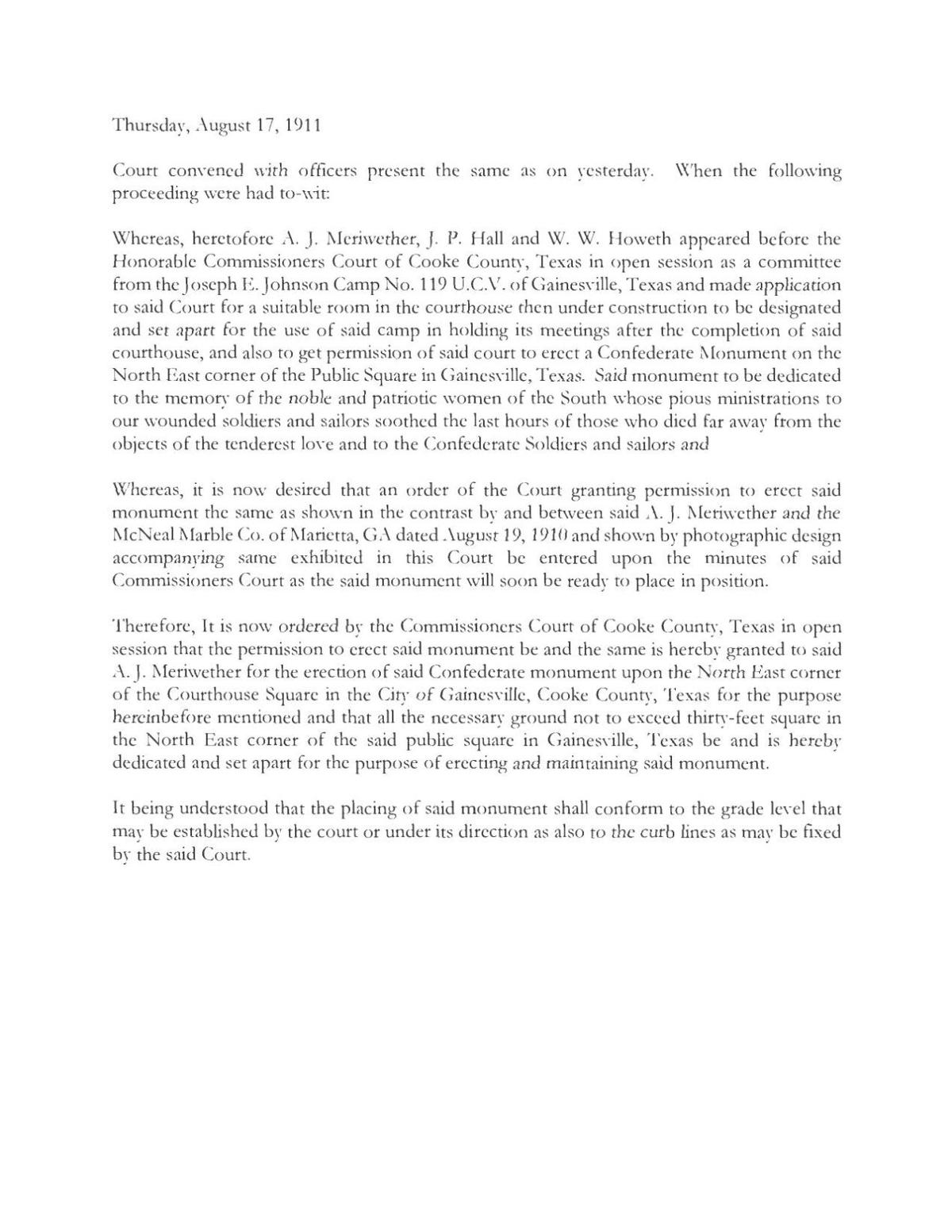 According to Aug. 17, 1911, meeting minutes of the Cooke County Commissioners’ Court, A. J. Meriwether, J. P. Hall and W. W. Howeth appeared before commissioners as a committee from the Joseph E. Johnson Camp No. 119 United Confederate Veterans of Gainesville and requested a meeting room in the courthouse, then under construction, as well as get permission to put a Confederate monument on the northeast corner of the courthouse square.

The monument was to be “dedicated to the memory of the noble and patriotic women of the South whose pious ministrations to our wounded soldiers and sailors soothed the last hours of those who died far away from the objects of the tenderest love and to the Confederate Soldiers and sailors,” the meeting minutes say.

Howeth was the second operator of Gainesville’s oldest business still in existence, Howeth Title Co., according to a special report by the Gainesville Economic Development Corp. published in the Register. He was also a member of the first city council when Gainesville incorporated in 1873 and later became mayor. Howeth is also buried at Fairview, which was previously the Howeth Family Cemetery. 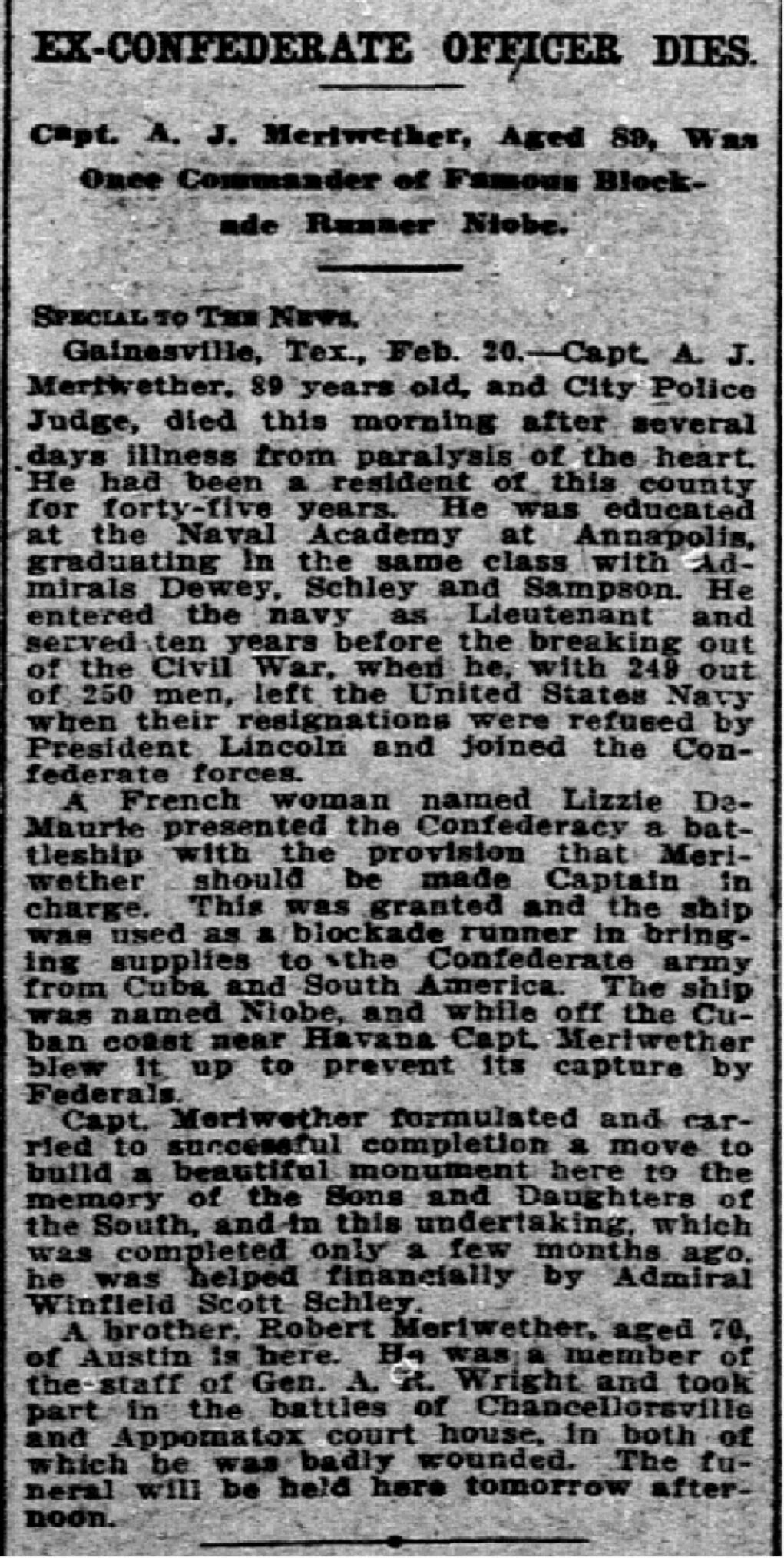 According to a Dallas Morning News article published Feb. 21, 1912, Meriwether received financial help for the Confederate monument on the courthouse grounds from Winfield Scott Schley. Schley was an admiral in the U.S. Navy and fought for the Union during the Civil War. Meriwether and Schley graduated in the same class at the Naval Academy together, the DMN article states.

Brinkley said he’s spent “a considerable amount of time” over the past two months looking into the monument issue from all perspectives.

“It was originally told to us by outside counsel in early June that counties over 40,000 could not hold such nonbinding referendums,” Brinkley said. “However, in inquiring more about the matter with outside counsel in mid to late July, I learned that it was indeed possible based on what population number you use.”

Brinkley said Austin-based law firm Allison, Bass & Magee LLP is the outside counsel the county used for advice on the referendum.

“We didn’t pay them for the information, but they represent the Texas County Judge and Commissioners Association and many counties in many local issues,” Brinkley said. “They typically answer questions like this one at no charge.”

The county is using the most recent census count in determining it can hold a referendum. As of April 1, 2010, the county had a population of 38,437, according to the U.S. Census Bureau. The latest population estimate from July 1, 2019, shows the county’s population has increased by 7.3% or by 2,820 people.

When asked for an estimate on how many inquires Brinkley has had regarding the monument, he said he had received about 200 emails and dozens of phone calls in the past eight weeks, “with close to half of those coming just within the past 10 days.”

The Aug. 17 specially called meeting was announced by Brinkley at the July 27 meeting of the Cooke County Commissioners’ Court.

Brinkley said should members of the court decide to put a referendum on the November ballot, the county can do so “at absolutely no cost.”

“I hope that this would be a good way for the community to engage in dialogue and discussion and not shouting matches and armed protest on the square,” he said.