When early voting opens Monday, Oct. 21, in the Commissioners Courtroom of the Cooke County Courthouse, voters will be using not just a new early voting location, but also new machines to mark their ballots.

The county bought 34 ExpressVote ballot marking devices, 22 ExpressPoll tablets and five DS200 precinct scanners this year and election staff are preparing for their first official use next week. County commissioners authorized the machines’ purchase for a little more than $200,000 from Election Systems & Software, the Register previously reported.

Cooke County Clerk Pam Harrison has been training poll workers to set up and use the ballot marking devices — essentially a touchscreen computer that prints a marked paper ballot based on a voter’s choices on the screen. She’s also had nine members of the public come try out a demo machine set up in her offices, she said. The demonstration unit remains available 8 a.m. to 5 p.m., in the clerk’s offices on the first floor of the courthouse.

The new ballot marking devices will be used in tandem with traditional paper ballots, Harrison said. Voters who are willing to use one of the new devices will be encouraged to do so if one is available, she said.

Where: Commissioners Courtroom on the first floor of the Cooke County Courthouse, 101 S. Dixon St.

In case all the new devices are in use or a voter isn’t comfortable using one, traditional paper ballots will still be available to mark by hand, according to Harrison.

“I would like to encourage all voters if available to use the ExpressVotes,” Harrison said.

She expects their use to cut down on the costs of elections and reduce the time needed to tabulate votes on election night.

That’s because the marked ballots printed by the machines are tabulated automatically with the new precinct scanners, she said. The process is also designed to eliminate confusion that could arise from unclear marks made by hand.

Delays in announcing election results after the close of an election often arise because elections officials must decide how to interpret ballots with unclear or multiple markings in a given race or issue, Harrison explained.

“We have hundreds of ballots to resolve” after some elections, she said.

Use of the machines

Starting with early voting for the Nov. 5 constitutional amendment election, Cooke County voters will be asked to sign an electronic poll book instead of a paper book before being issued their ballot. Voters who will use one of the new ballot marking devices will then receive a strip of cardstock with a barcode printed at the top and will be directed to insert it into a ballot marking device according to instructions printed on front of the machine. The ballot marking device reads the barcode to display the races and issues for that voter’s precinct on the touchscreen. 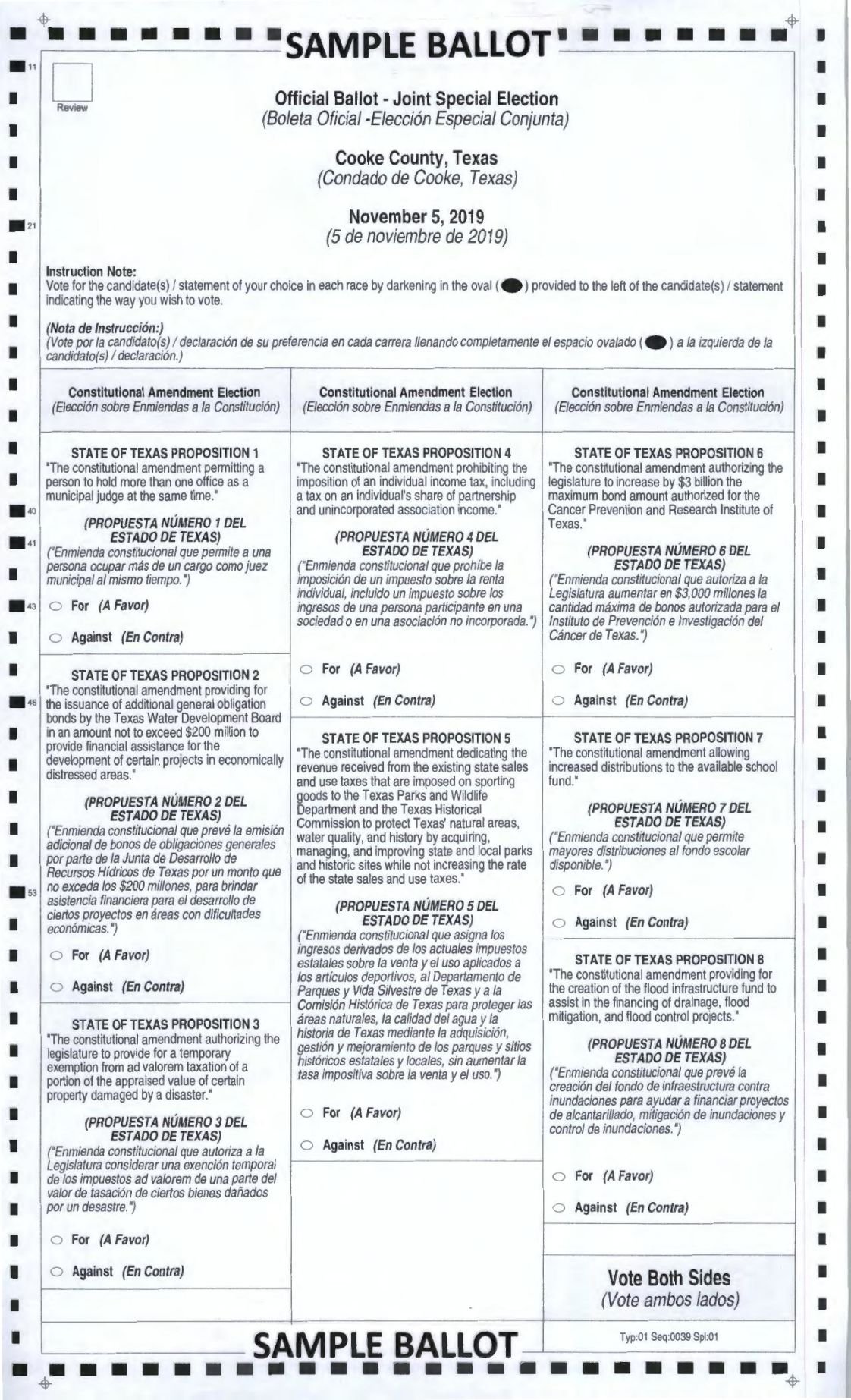 The touchscreen will use a step-by-step process with “back” and “next” buttons to display ballot items for voting. It also includes options to use a large-print display or change the colors to a high-contrast format for voters with poor vision. Headphones and a Braille remote will be available for voters who need them, too, Harrison said.

Voters can move backward through the ballot screens if they need to change their vote and can also go back to alter their choices from a review screen before printing their ballot. Once the ballot prints, voters will also be able to verify their choices were recorded correctly on the printout. Voters who want to change their choices after printing a ballot will need to take their ballot to a poll judge, Harrison said, who can “spoil” the printed ballot and reissue a blank one for that voter’s precinct.

Early voters who are satisfied with their printed ballots will be asked to slide them into one of the new precinct scanners, Harrison said. The precinct scanner will tabulate the ballot immediately and deposit it into a locked ballot storage box. Ballots will be retained for 22 months as a paper backup, she said.

Harrison’s office has tested the new precinct scanners repeatedly, comparing its tabulations with a hand count of the test ballots. “It’s been 100% accurate every time,” she said.

When and where to vote early

With the exception of the U.S. citizenship certificate, which does not expire, the acceptable photo ID must be current or, for voters aged 18-69, have expired no more than four years before being presented for voter qualification at the polling place.

OUR VIEWPOINT: On casting ballots electronically

Change has come to Cooke County, at least for anyone willing to give new election systems a chance.