A few months after it went online, the solar farm just off I-35 a few miles south of Gainesville has been sold to a California-based solar developer.

Adapture Renewables Inc. out of Oakland, California, announced in early March it had bought the 81-megawatt Rippey Solar project at 199 W. Spring Creek Road from Hanwha Q CELLS USA Corp. Terms of the sale were not disclosed.

Q CELLS “had acquired the project mid-development,” according to Adapture Renewables' press release. The original developer, Belltown Power, had announced in April 2020 it had sold the project and two others to an unnamed investment partner. In its April sale announcement, Belltown Power said it had contracted to sell the project's energy output to an affiliate of Vistra Energy.

Construction on the Rippey solar development started the same month and it went online in December 2020, according to Adapture Renewables.

Counting Rippey Solar, the firm owns 95 megawatts of solar projects in Texas with more in the works.

The company doesn't plan on expanding the Rippey project or developing any additional solar projects in Cooke County, according to Adapture Renewables Chief Operations Officer Donald Miller, “though that could always change,” he added.

The project represented a small portion of nearly 12 gigawatts of new solar power generation that went online across the nation in 2020, according to the U.S. Energy Information Administration. It was among about 5.7 gigawatts that had been expected to go online in the last two months of 2020.

Cooke County commissioners in 2018 had voted in favor of a tax abatement for the solar development, also referred to as BT Cooke with the address of one of the other parcels, 965 W. Spring Creek Road. The abatement was for 50% of taxes over 10 years and applied to any increase in property value resulting from the solar project — in other words, a half-off discount on new taxes in return for making the land more valuable to start with. At the time, officials estimated the project would bring in more than $1.2 million to the county over 30 years with the abatement in place. 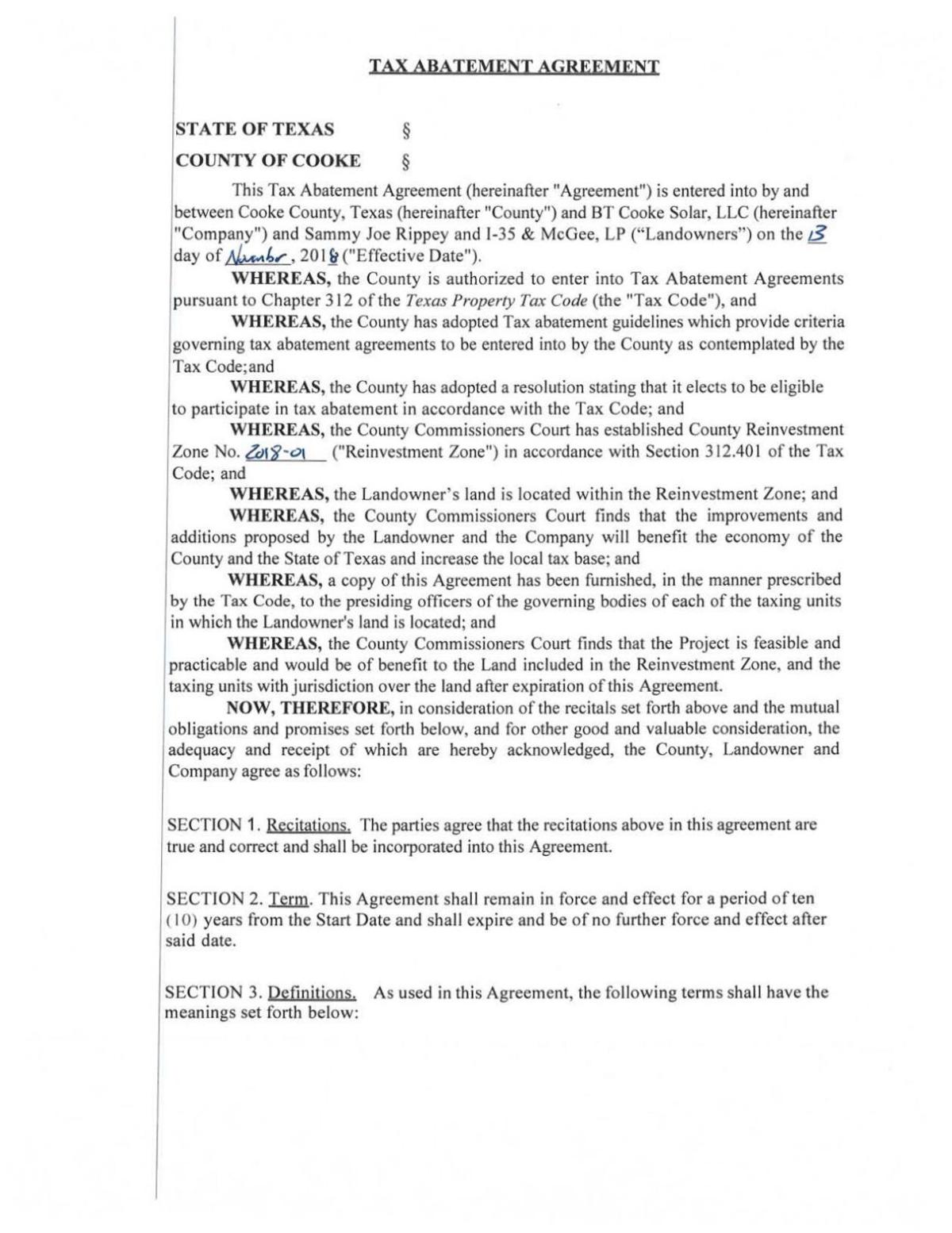 That was a massive projected increase since it was previously taxed as ag exempt land, which would've brought in about $7,300 to the county over the same time period, the Register previously reported.

In 2020, when the solar project was built and went online, the appraised value of the roughly 415 acres and improvements rose to over $2 million with the abatement in place. That was up from about $40,400 in appraised value the previous year, property value records show.

The Register previously reported that officials expected the solar farm to lose about 80% of its value in the first 10 years.

Cooke County Appraisal District property records show $35,911 was levied in total taxes on the project's properties for 2020, including $5,997 in county taxes and $2,521 in road and bridge fund taxes. Other taxing entities were the Gainesville Hospital District, North Central Texas College and Gainesville and Era school districts.