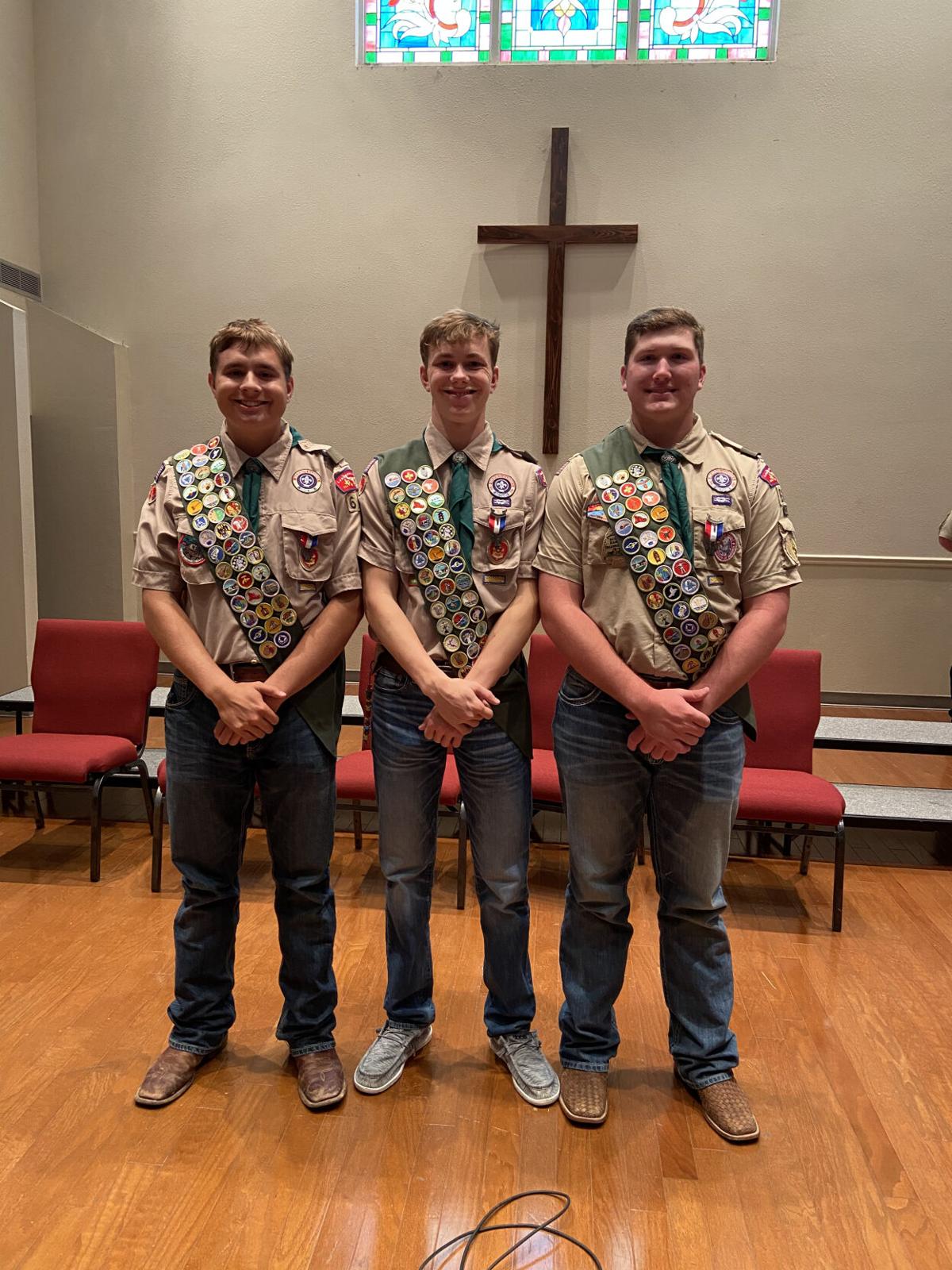 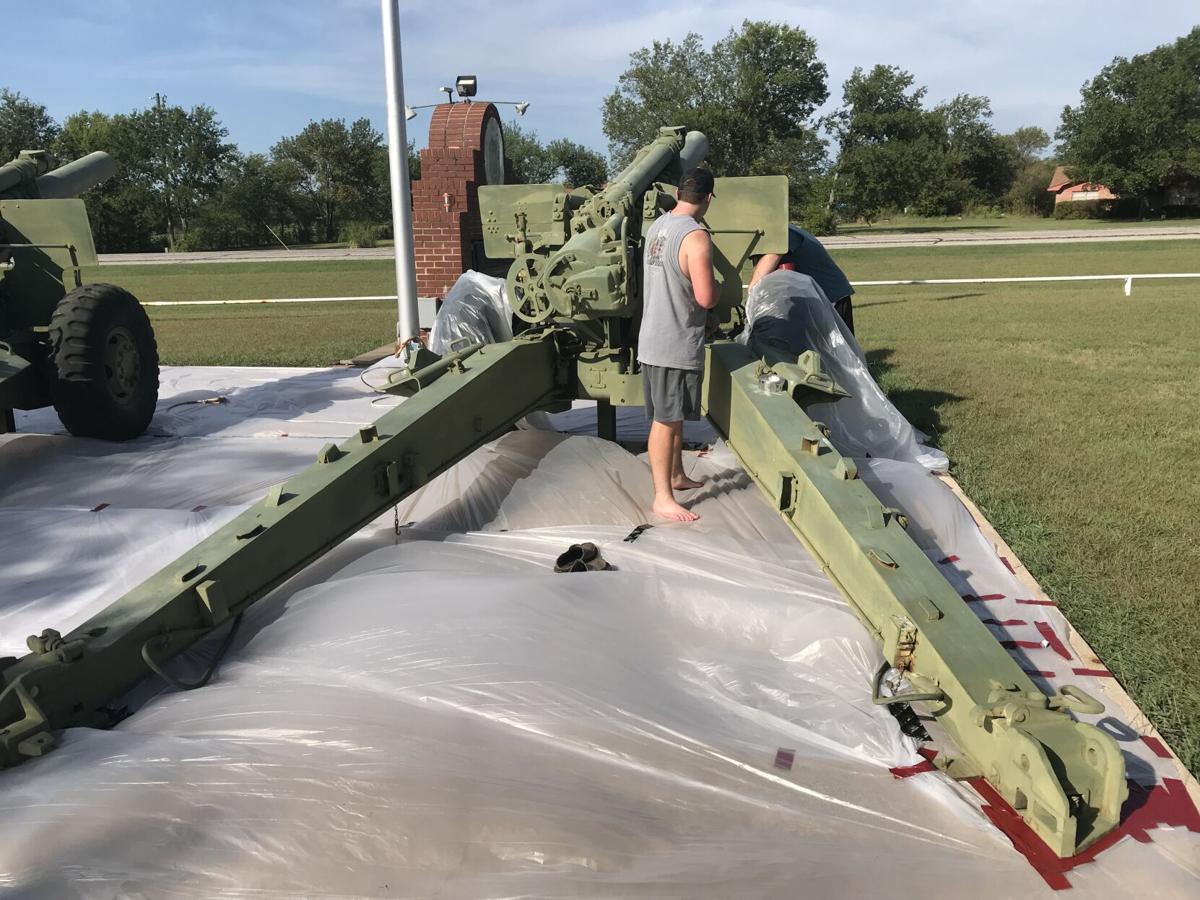 Garrett Tackett, a 17-year-old Lindsay resident, works to restore howitzers displayed in front of Veterans of Foreign Wars Post 1922, 3332 N. Grand Ave. The restorations were his Eagle project. Tackett was awarded his rank of Eagle on Sunday, June 6, during a ceremony at First United Methodist Church in Gainesville.

Garrett Tackett, a 17-year-old Lindsay resident, works to restore howitzers displayed in front of Veterans of Foreign Wars Post 1922, 3332 N. Grand Ave. The restorations were his Eagle project. Tackett was awarded his rank of Eagle on Sunday, June 6, during a ceremony at First United Methodist Church in Gainesville.

The highest rank in Boy Scouts is Eagle and three young men have recently achieved that status, according to Gainesville-based Troop 668 Scoutmaster Mark Tackett.

On Sunday, June 6, Garrett Tackett, Andrew Goldsmith and Ryan Wolf were presented their awards during an Eagle Court of Honor ceremony at First United Methodist Church in Gainesville.

“These boys started their Trail to Eagle together in 2010 as Tiger Cubs in Pack 631 in Lindsay,” Mark Tackett said. “In 2015, they crossed over to Boy Scouts to continue their adventure.”

Garrett Tackett, a 17-year-old Lindsay resident and son of Mark Tackett, obtained the rank of Eagle in 2019 when he finished his Eagle project at Veterans of Foreign Wars Post 1922, 3332 N. Grand Ave. He restored the howitzers displayed in front of the VFW post.

Goldsmith, also a 17-year-old Lindsay resident, obtained the rank of Eagle in 2020 when he completed his Eagle project at the VFW, according to Mark Tackett. His project entailed painting several hundred yards of pipe fence surrounding the VFW.

Wolf, a 17-year-old Gainesville resident, obtained the rank of Eagle in 2021 when he finished his Eagle project at St. Mary's Catholic School in Gainesville. He painted the field goal posts that St. Mary’s uses for its football team.

"It's very impressive that so many of our alumni give back," she said.

Otto said Wolf not only painted but helped with the design of the goal posts. In the future, they can be used for soccer, she said.

“The boys started the process together and wanted to finish together,” Mark Tackett said of the Lindsay High School students.

A third project at the VFW was done by Mark Tackett’s other son, Wyatt Tackett. He built two metal benches and created a sitting area for the veterans in the shaded park area of the post. However, Wyatt Tackett, 14, has one merit badge to complete before he gets awarded the rank of Eagle.

Mark Tackett said his sons, Garrett and Wyatt Tackett, along with Goldsmith, wanted to help veterans in the community and that’s why they chose the projects they did at the VFW.

The VFW projects were completed by working closely with VFW Commander Dennis Kretzschmar to get the projects approved, paid for and completed.

A dedication ceremony was held at the VFW on Saturday, June 5, for the three projects worked on out there.

Kretzschmar said about 50 people attended Saturday’s event and he hopes the partnership with the VFW and Troop 668 will continue.

He and his wife, Quartermaster Melanie Kretzschmar, were invited to attend Sunday’s presentation.

The U.S. Army veteran said he was in Cub Scouts and “didn’t realize” all the hard work and dedication it took to get the badges the three just received.

“It was quite impressive,” Kretzchmar said. “It was heartfelt for me to be a part of it.”

All the projects were paid for by donations and completed through volunteer work, according to Mark Tackett.