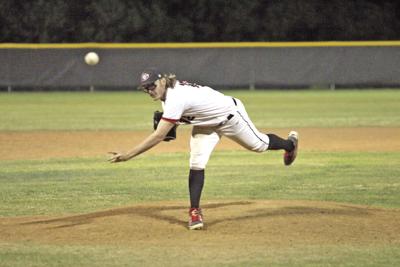 With head coach Shane Minks stepping down to move to Weimar High School as the football team’s offensive coordinator and new head baseball coach so he could be closer to his home of Houston, the Gainesville Leopards still have a wealth of players returning next season.

With six juniors and five sophomores on the squad, the team went through it’s growing pains, but it also picked up its first district win in several seasons.

Recently, the Leopards had five players named to the District 9-4A team beginning with junior catcher Draike Sparks, who was the lone selection to the first team.

“Draike is a good ball player,” Minks said. “He struggled early as a freshman, but he’s been growing ever since. He had a great year this year. He hit above .400 at the plate and was our rock defensively behind the plate. I’m looking forward to watching him progress.”

Minks said Sparks matured throughout the year, both athletically and as a leader.

“Dylan did a great job for us on the mound,” Minks said. “It’s a pretty deep district on the mound, but he was right there with those guys. He didn’t quite make that first team, but he’s a solid pitcher in our district and he’s going to be a leader on that team moving forward.”

Landon Prestage was also named to the second team as an infielder and Minks said his versatility was crucial to the team.

“Landon played all the positions in the infield at one point or another,” Minks said. “He ended up as our shortstop later in the year and that’s a tough position to play. He gave us his all and did a great job defensively. At the plate, he battled. He had a lot of big at-bats for us on the year.”

Wade Riddle also made the second team as an infielder and Minks touted his ability to play all over the diamond as well.

“He played anywhere from third to second base to left field to center field,” Minks said. “He pitched for us. He did a little bit of everything. He allowed us to move pieces around the field. You need that type of guy on varsity. He showed up to the park and played whatever position we needed him to. At the plate, he got better and battled throughout the year. He was a really tough out.”

Minks said he was proud of his defensive play this season.

“He kind of grew into an outfield role,” Minks said. “He was a catcher and an infielder, but this year he played pitcher and outfielder. He anchored center field and made a couple big plays for us. He was a tough out in district play and he hit around the .300 mark.”

Dawson Cassidy and Devlyn Hall were honorable mention selections and Minks said they played a big role on the team.

“There’s a couple guys that got honorable mention that were good performers for us, but they just didn’t make the cut on the first or second team,” Minks said. “The big thing is, you get all 10 of the guys back along with some JV guys, there are big things coming for that group.”

The Leopards finished 7-17 on the season and 1-9 in district play with their 7-3 win over Bridgeport.

Minks said he thinks the experience gained this season will pay off next year.

“There were some growing pains throughout the year,” Minks said. “We played well toward the end and we couldn’t quite get that playoff spot. They’re battle-tested now. There shouldn’t be any surprises next year. We had a lot of guys playing their first varsity baseball games, but it won’t be like that next year and they should be able to bring the JV guys along.”

Garrett Thomas was recently hired as Gainesville’s new head baseball coach and while Minks said it was tough to move on and he credited athletic director James Polk for his leadership.

“He kind of let me do my own thing in the program and he helped me along as a first and second year head coach,” Minks said. “He was always there for me to talk to. The team and I kind of grew together. We were all kind of new at the same time. That group of guys will always hold a special place in my heart.”