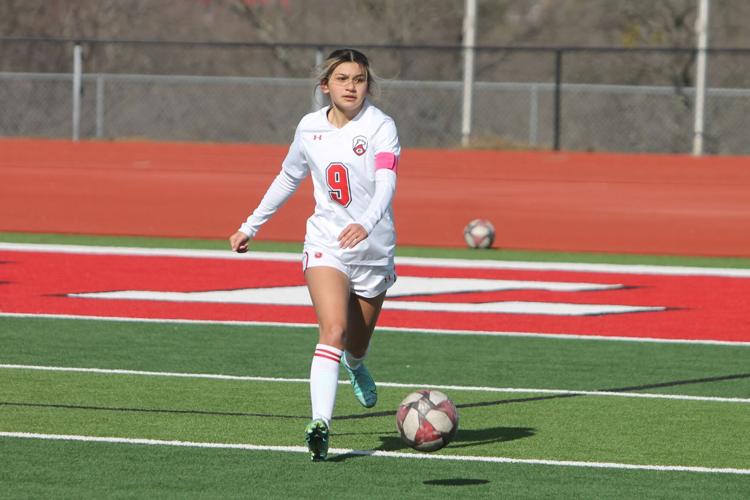 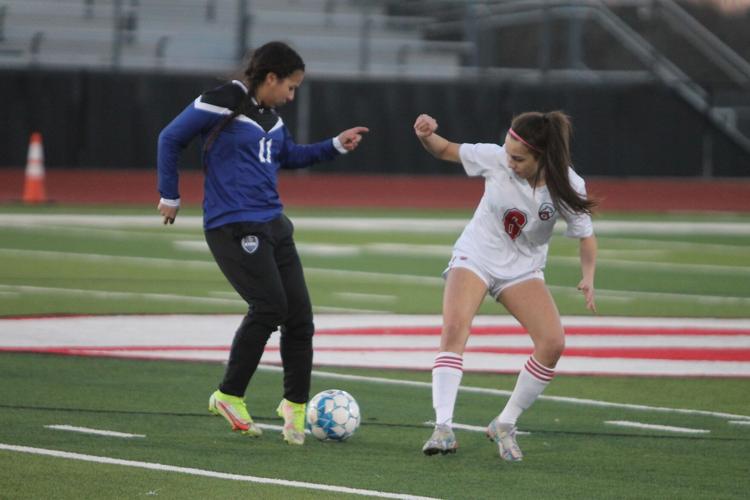 Joscelyn Garcia duels with a Lubbock Estacado player for the ball Thursday.

Joscelyn Garcia duels with a Lubbock Estacado player for the ball Thursday.

Gainesville coach Hector Sagrero said he viewed the weekend as a learning experience.

“We wanted to win first place for the tournament, but at the end of the day, it’s learning,” Sagrero said. “All of the teams were really good. Just to compete, come out losing the first game and then coming back and being able to make it to the championship, that says a lot in the girls and their abilities.”

Gainesville opened tournament play by splitting a pair of games Thursday. After falling to Bridgeport in the first game, the Lady Leopards bounced back in the final game of day one against Estacado. Jasmyn Jackson scored twice in the first 10 minutes of play, and Gainesville held on to complete the shutout.

“They started off hot,” Sagrero said. “They were first to the ball. A lot more communication. I feel like they were definitely on it, because first game, we didn’t handle business.”

Jackson was dangerous from the opening kickoff and forced a save just under a minute into the game. She opened the scoring in the fourth minute with her second shot after getting past the defense and slipping the ball past the goalkeeper.

She scored again six minutes later in similar fashion. She had two more good chances in the 15th minute but just missed the target, the second missing by mere inches. She finished with four shots on target.

Gainesville goalkeeper Emily Montoya made five saves, including one with 1:20 remaining. She also played well off her line, getting to a few loose balls before Estacado could pounce.

Gainesville followed up its win against Estacado by beating Haltom on Friday. Jackson scored the game’s only goal.

In the championship, Hillcrest out of Class 5A was simply too good for the Lady Leopards. The Lady Panthers possessed the ball most of the game and peppered the Gainesville goal with shots.

Sagrero said the Lady Panthers play well together, especially in the midfield.

“They have really good first touches,” Sagrero said. “I think that’s a big changer for us. Once we had the ball, our first touch, kind of sloppy at first. Their high pressure caused us to get uncomfortable easily, so we’d lose the ball real quick. That’s why they were constantly in our attacking third.”

Hillcrest freshman Kamrynn Martinez scored a hat trick. She scored her first goal in the final 10 minutes of the first half on a shot that bounced in off the left post.

Martinez scored her other two goals nine minutes apart in the second half, capitalizing on turnovers by Gainesville.

Gainesville freshman Sadie Larraga had a good game at goalkeeper. She made 12 saves, including seven in the first half, doing her best to keep the Lady Leopards in the game.