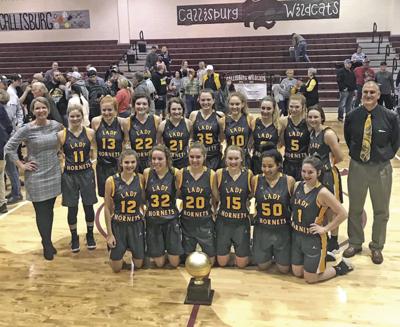 The Era Lady Hornets matched up with a difficult local rival in the Collinsville Lady Pirates, who were 31-1 on the season.

It took more than four quarters for a team to emerge, but it was the Lady Hornets who bested Collinsville 11-5 in overtime for the 78-72 win on Tuesday, Feb. 19 at Callisburg High School.

“It was exciting,” Neu said of the overtime win. “That was one that we really wanted and we knew we were playing a very good, quality team. We knew it was going to take a good effort to beat them and it took everything we had. They’re scary because they shoot so many threes and once they start getting a few, they get on a roll.”

Era had a wealth of scoring, starting with junior guard Briana Knabe’s 26 points along with 25 points from junior guard Sandra Christian.

Knabe only had six points at halftime but rebounded in the second half. She and Christian combined for nine of the Lady Hornets’ 11 points in overtime.

“[Knabe] kind of caught on the second half and in overtime,” Neu said. “We adjusted on offense a little bit and tried to get the ball to her a little bit more. Christian really stepped up. She had seven threes. She stepped up and hit some big shots.”

Neu said the team can be dangerous offensively if they have four players in double digits.

“Sandra is a good three point shooter and she has been on the last couple days,” Neu said. “She had over 25 points and Bri [Knabe] had 26. Then we had Maddie Chisum with 10 and Karlee Tucker with11, so you have four players in double figures. That’s pretty nice.”

Collinsville jumped out to a 13-8 lead in the first quarter and led 32-20 at halftime.

Era outscored Collinsville in the third frame 22-18 as each team exchanged 3-pointers and the Lady Hornets used a 25-17 fourth quarter to send the game to overtime.

The Lady Hornets advance to the regional tournament at McKinney Boyd High School, where they will face Campbell at 5 p.m. Friday, Feb. 22.

“They have a really good player who’s pretty solid,” Neu said. “She can play anywhere from point guard to post so that will a little tough to guard. They’re not flashy, but I do think we match up pretty well.”