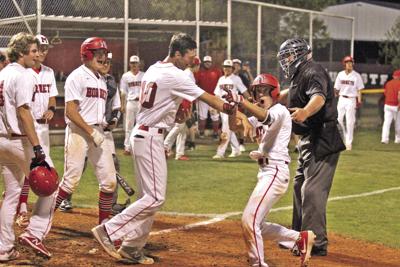 Muenster head coach Josh Wheeler and his son Jonathan Wheeler had a special moment on Friday, April 5, in one of the Hornets’ most tense games of the season.

The Hornets looked to be cruising along as they had built a 6-0 lead against Lindsay, but the Knights clawed back and eventually took an 8-6 lead after Lindsay boosted a two-run home run to take the lead in the fifth inning.

But Jonathan Wheeler and the Hornets wouldn’t go down without a fight of their own.

The Hornets stayed patient at the plate and eventually worked a bases-loaded situation for Wheeler, who made the most of his opportunity.

Wheeler drew a 3-1 count and launched a Walker Turbeville fastball over the left-field fence for the go-ahead grand slam to send his team into a tornado of excitement, meeting him at the plate with celebration.

Muenster held off Lindsay in the seventh inning and kept their two-and-a-half year run of undefeated district play intact with the 10-8 victory.

“It’s probably the biggest win we’ve had this year,” Josh Wheeler said. “With the time of the game, it’s just a big hit, man. He’s been squaring up the ball a lot. He takes batting practice all the time. We say don’t worry about hitting the ball out the ballpark. We don’t want to try to hit the ball out. Jonathan has been squaring up. It just makes me proud.”

Wheeler said he encourages his players to be confident at the plate and take advantage of certain opportunities.

Wheeler said Jonathan did just that.

“A 3-1 count is a fastball count with the bases loaded,” Wheeler said, “you’re probably going to get a fastball, especially with a pitcher that was on the mound. So I mean, you’re looking middle in and if he gives you a fastball, you’ve got to have confidence in your players to hit the ball. And you know, he connected with it. At 3-1, we want something that we can drive and he drove it.”

Both teams had to go past their usual starting pitcher and bring in relief pitchers. Wheeler said it was par for the course in the rivalry game.

“I thought we played decent defense,” Wheeler said. “We’re definitely better pitchers in the playoffs. We’ve got a lot of guys that are working on both ends of trying to throw strikes with breaking balls. It was just kind of one of those games.”