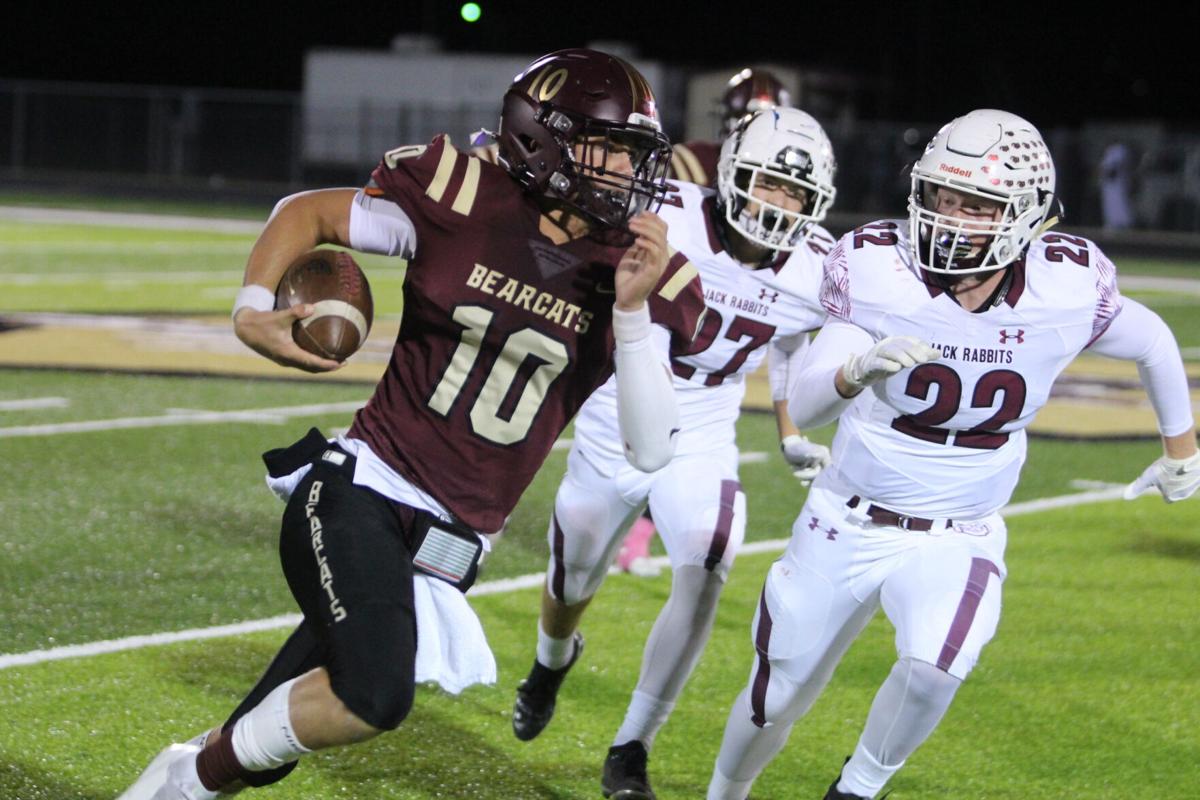 Whitesboro quarterback Mac Harper pulls away from Bowie defenders in a 35-7 victory on Friday, Oct. 23, at Bearcat Stadium. 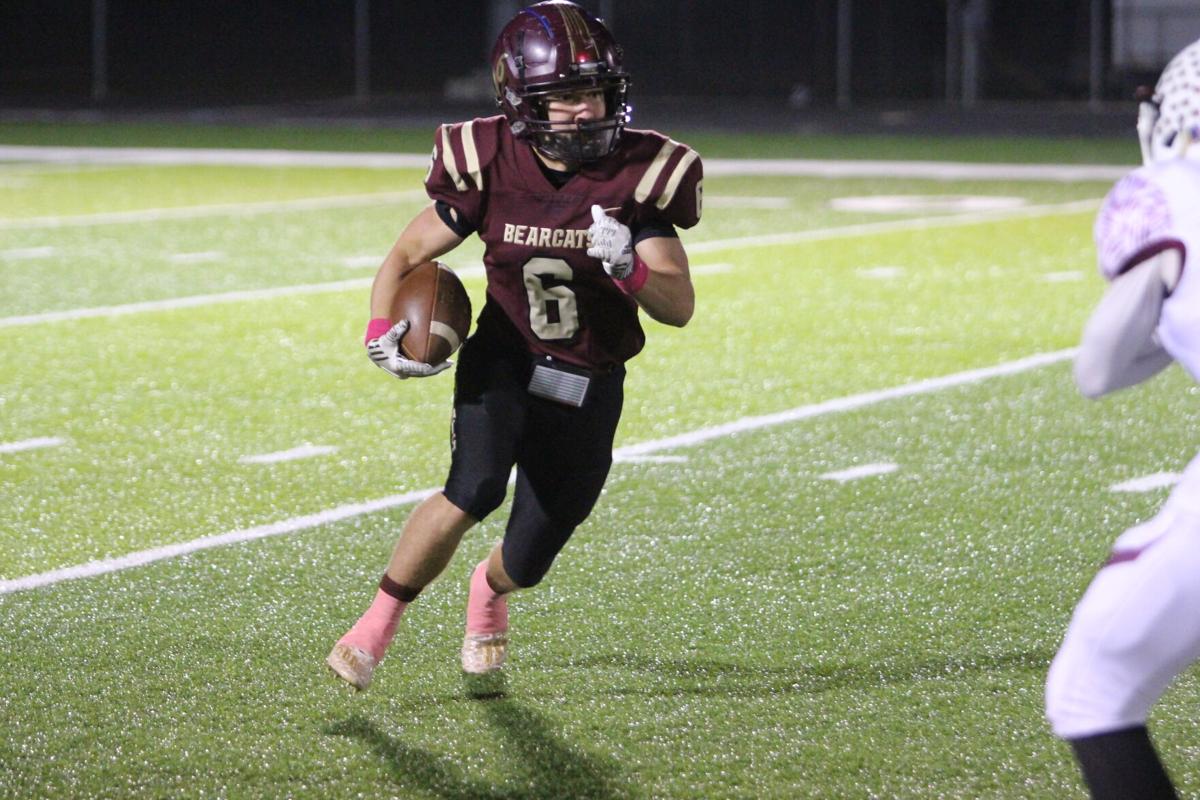 While the Whitesboro offense found its footing in the first half, the Bearcats’ defense was the star of the show Friday, Oct. 23.

In a crucial District 4-3A tilt at Bearcat Stadium, Whitesboro clamped down on the Bowie Jackrabbits from start to finish, pitching a shutout in the first half.

The Bearcats scored late in the second quarter to breath life into their offense and took off in the second half as they rolled to a 35-7 victory.

It was the third victory of the season for Whitesboro and the Bearcats’ first winning streak of the year. It also put them at 3-2 in district play at 3-5 overall.

Whitesboro head coach Cody Fagan was elated after the win as he said the team is peaking at the right time of the year.

“I’m really excited,” Fagan said. “They’re playing really good football and we’ve given up only 13 points in the past two games to two pretty good football teams. The offense is really clicking at the right time and we’ve played six out of eight good quarters. Anytime you have two turnovers and still score 35 points, you’re going to be happy with that.”

The Bearcats began the game by forcing the Jackrabbits to turn the ball over on downs at the Whitesboro 30-yard line.

Whitesboro’s offense struggled in the first half, however, as it went 3-and-out and had to punt.

Both offenses had trouble finding their groove, but it was the Bearcats that saw the end zone first.

After taking the Bowie punt at their own 34-yard line, the Bearcats used a 24-yard run from Devon Price to get their mojo going and move the ball to the Bowie 40-yard line.

Two plays later, sophomore quarterback Mac Harper located junior running back Jacob Smith for a 30-yard touchdown reception to give Whitesboro the 7-0 lead with 4:14 left in the first half.

The Jackrabbits put together a lengthy 13-play drive on their next possession, but they failed to convert on a fake punt and were forced to turn the ball over on downs again at the 50-yard line with 33 seconds left in the half.

“The defense was unbelievable,” Fagan said. “They’re flying around and playing great football and they’ve been watching a lot of extra film. They scheme them up really well. Coach [Brenton] Gabbert does a really good job figuring out what other teams like to do and getting them to do what they’re nto comfortable doing. The biggest thing is we’ve been tackling really well lately.”

Bowie tried to catch Whitesboro by surprise with an onside kick to begin the second half, but the Bearcats were ready and they recovered at their own 47-yard line.

Whitesboro needed just two plays to make the Jackrabbits pay for their gamble.

A 55-yard touchdown run from Price gave the Bearcats a 14-0 lead just 41 seconds into the third quarter. Price made several defenders look silly as he juked and danced his way to the end zone.

The Bearcats’ defense bowed up again by blocking a punt on Bowie’s next possession, setting them up with great field position at the Jackrabbits’ 43-yard line.

Whitesboro quickly capitalized as it used a 5-yard touchdown from Harper to inflate its lead to 21-0 with 5:24 left in the third frame.

“We talked to the kids at halftime about the game last year and how we didn’t have a good first half and we came out and hung 40 points on them in the second half,” Fagan said. “We talked about repeating that performance and they came out and played really inspired football. I’m really proud of those kids. It was a really fun half of football.”

Another quick stand by the Bearcats’ defense led to a 3-and-out punt to their own 43-yard line.

The Bearcats then had a key swing that put the game out of reach.

First, on 3rd-and-9, Harper found senior wideout Major Ledbetter for a 22-yard touchdown. Ledbetter weaved his way through the Bowie defense for the score to put Whitesboro up 28-0 with 1:21 remaining in the third quarter.

After fumbling a punt at the Whitesboro 29-yard line on the first play of the fourth quarter, the Bearcats’ defense responded by coming up with a timely sack on fourth down to force yet another turnover on downs.

A 1-yard touchdown from Bowie’s Ty Harris cut the lead to 28-7 with 5:42 left in the game, but the Whitesboro defense capped off the game with a forced fumble and return for a touchdown with 1:04 left to make it 35-7.

“They wanted that shutout and giving up those points late really upset them, so hopefully that’s a motivating factor going into next week against Paradise, which runs a much different scheme,” Fagan said. “We’re looking good at the right time and that’s what this town and this community is really known for.”