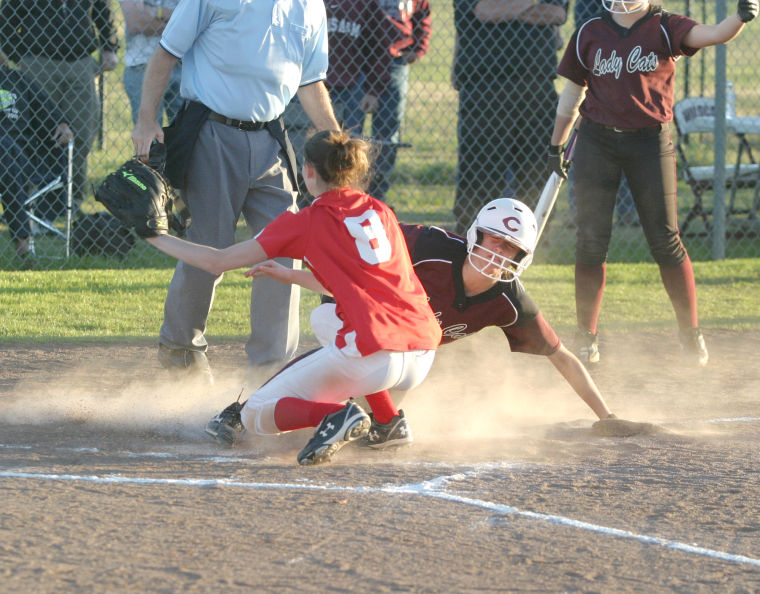 Callisburg courtesy runner Kenzie Rohrbough (right) slides into home plate to score the winning run in the bottom of the seventh inning against Pottsboro. The final two runs for the Lady Cats came off of wild pitches. 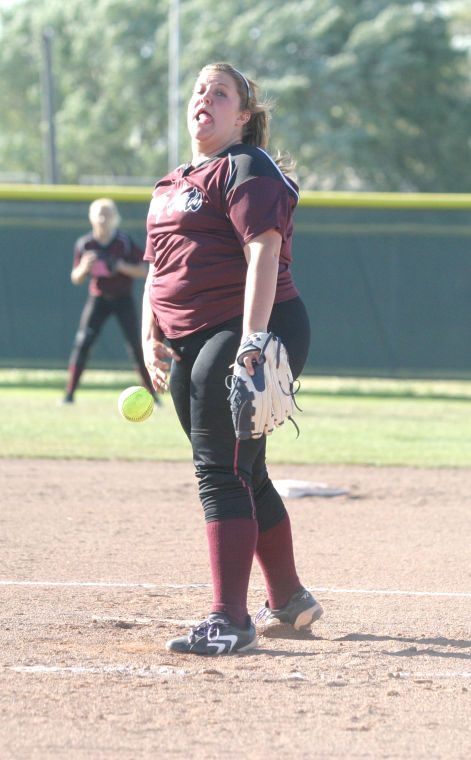 Callisburg pitcher Taylor Ramsey struck out 13 Pottsboro batters despite giving up 6 runs (4 earned) in a 7-6 win over the last place team in District 12-2A.

Callisburg courtesy runner Kenzie Rohrbough (right) slides into home plate to score the winning run in the bottom of the seventh inning against Pottsboro. The final two runs for the Lady Cats came off of wild pitches.

Callisburg pitcher Taylor Ramsey struck out 13 Pottsboro batters despite giving up 6 runs (4 earned) in a 7-6 win over the last place team in District 12-2A.

The Lady Cats don’t always have to win pretty.

Callisburg overcame another slew of errors, some slight struggles from its ace pitcher, and ultimately, a 4-run deficit to defeat last place Pottsboro 7-6 Tuesday to remain a leg up in District 12-2A.

“We had a hard time offensively tonight, but I figured transitioning from the Gunter pitcher to Pottsboro, it’s a bit of a change of speed,’ Callisburg coach Angela Allen said. “You have to really be disciplined, stay back and let the ball travel to you and we didn’t do a good job of that tonight. It took us awhile to get that down and once we did, we did our job.”

A 3-run jack by Alicia Blankenship over the left-centerfield fence put Pottsboro (6-17, 0-10 District 12-2A) up 6-2 after the fifth inning, and appeared to perhaps seal the Lady Cardinals first district win of the season as Callisburg’s sticks were quiet most of the night.

But the pop in the Lady Cats’ bats returned to form in the bottom half of the inning as the three, four, five and six-hole hitters each came up with doubles to cut the lead to one.

Ramsey led off the fifth with a double to left-center field. Courtesy runner Kenzie Rohrbough later scored on a double to the same spot by Ashley Williams. Cheyenne Wilson followed with another double to where Ramsey and Williams placed their extra-base hits as did Lydia Hardcastle to reduce the lead to 6-5.

“Our three, four, five and six hole can do that for us,” coach Allen said of her lineup’s success in the late innings. “We know we have a shot if we have those kids coming up in the lineup to get those extra base hits and drive in runs. They do lead us in extra-base hits and they lead us in RBIs, so it was good that it fell that way that those kids came up at the right time and they came through.”

Ramsey allowed just one runner in the final two innings after she and the defense allowed 11 in the first five.

Madison Reed stepped up in the seventh with a double to lead off things for Callisburg.

But then a scary moment occurred for Pottsboro relief pitcher Justus Malone who took a line drive off her left shoulder from the bat of Ramsey, stopping play down for several minutes.

Starting pitcher Kari Drake returned in Malone’s stead with two runners on base.

Williams drew a no-out walk to load the bases, bringing up Wilson to the dish.

But it wasn’t the bats that came through in the end as a wild pitch by Drake scored Reed from third and moved the remaining runners to scoring position. Wilson later walked to reload the bases.

But another wild pitch went to the back stop as Rohrbough slid in safely for the winning run.

Ramsey cruised through the first two innings, striking out five batters, but then errors in the third and fourth set up run-scoring opportunities for the Lady Cardinals who eventually erased a 2-0 deficit to take a 3-2 lead after the fourth inning.

“The thing about her is she’s a competitor, so whether she has the best stuff that she’s every had or not her best stuff, she’s still going to get in the circle and battle and battle and that’s the kind of kid she is,” Allen said of the North Central Texas College-bound senior fireballer. “Even if she doesn’t have her best stuff, I always know that she’s the one that you want in the circle.”

Callisburg (22-6-1, 9-1) led 2-0 after the first inning as Kenzie Pringle reached on a walk then stole second. Ramsey plated her with an RBI double. Hardcastle then drove in Ramsey’s courtesy runner with a single.

Also chipping in for the Lady Cats were Williams and Wilson, each with RBI doubles, Reed had a double and a run scored, Rohrbough scored 3 runs and Pringle scored a run and finished with a steal.