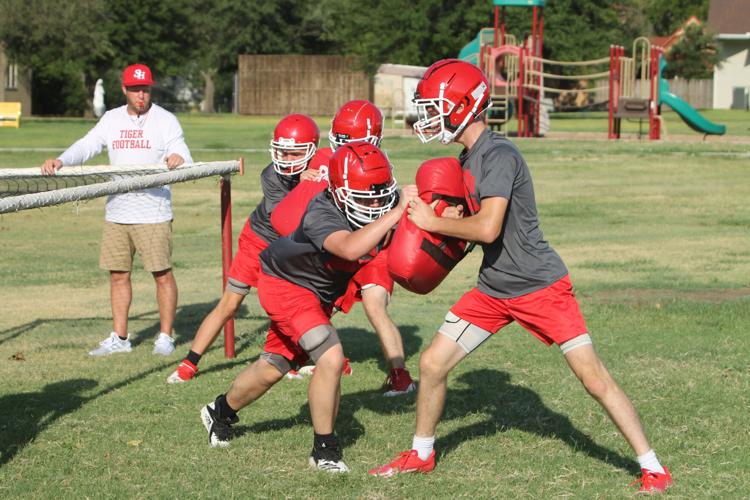 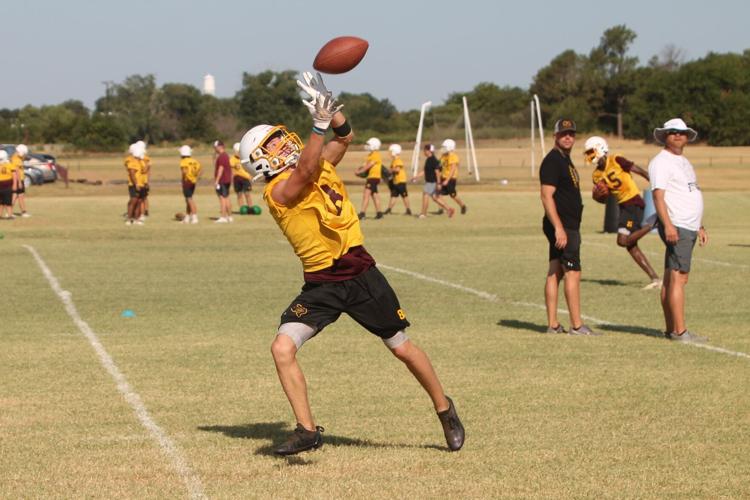 Cash Morgan makes a catch during a Collinsville football practice. 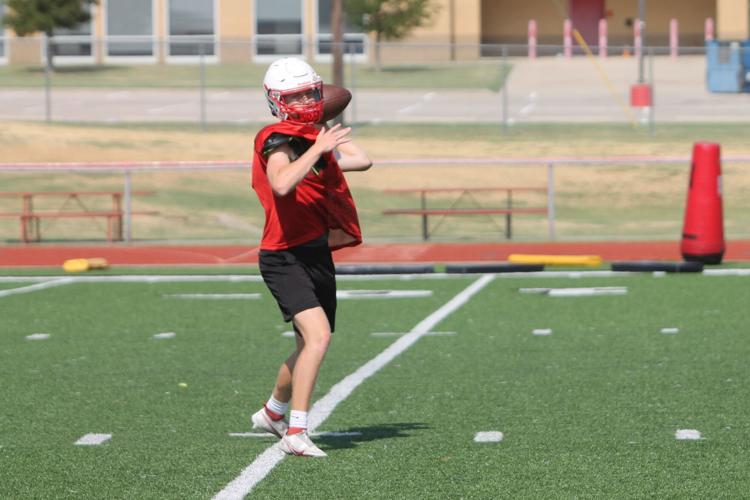 Cash Morgan makes a catch during a Collinsville football practice.

The first week of high school football practice is wrapping up, but there is still plenty of work for area athletes before the season beings.

Muenster coach Brady Carney said this week has been a little slow since the Hornets have some new coaches and are changing a few things, but the effort and participation has remained high.

“Muenster kids are hard-nosed, smart,” Carney said. “They’ll put the time in. They’ll focus up, and they’ll learn it. It’s just new compared to what we have done the last 12 years. These guys grow up from the time they’re in seventh grade hearing the same verbiage and doing the same thing on defense and offense for the most part, and some things we’re doing now are new. They’re going to be fine with it. It’s just going to take a little bit longer than what we’re used to as far as really hitting on all cylinders.”

Football fans in Muenster have plenty to be excited about on both sides of Seventh Street. The Hornets are the preseason No. 2-ranked team in their class, while Sacred Heart is buzzing after last year’s run to the state championship game. Both teams have had their largest turnout in years with kids excited to be a part of these squads.

The Tigers bring back most of last year’s state runner-up team, and coach Dale Schilling said it is already making a huge difference.

“They help the young guys out so much,” Schilling said. “(So far,) it’s the best I’ve ever seen as far as older guys helping out young guys, it really is. We’re not changing much, and you’ve got so many back, so it’s just second nature to them. They just know what they’re doing.”

Elsewhere, Collinsville also boasts a highly experienced team. The Pirates lost one senior from last year, so virtually everyone returns. The Pirates have a tough schedule ahead of them after moving into the same district as Muenster, but the experience should help.

Coach Garrett Patterson said it has already shown in practice.

“I would say we’re further along right now than we were last year,” Patterson said. “I think there’s a lot more understanding on what we’re doing this year than what we had last year at the beginning of the year. Definitely, you can tell they’re an older group, which is nice. But at the same time, being older, being young, I don’t care. Just make plays.”

Regardless of how far along each team is, they have another week of practice before facing outside competition in the first scrimmages of the preseason. Every team expects to be better conditioned and have a greater grasp of the playbook before seeing another jersey across the field.

Carney said he wants to see the Hornets executing their base offense and defense before traveling to Jacksboro on Aug. 12.

While Muenster hits the road, the Tigers and Pirates will both face Cooke County opposition. Sacred Heart will travel to Valley View, while Collinsville will host Callisburg.