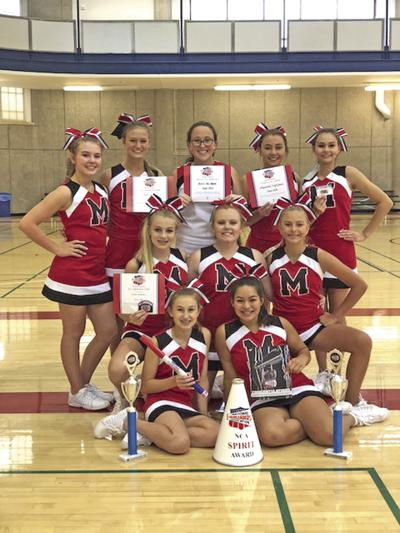 Chloe Hacker and Shae Budish were named to the all-american team with Katherine Klement also being named to the team and being awarded for all-around best mascot.

The entire Muenster team was awarded the top team cheer award along with the most spirited and best motion technique. The squad also received a bid to the nation competition.

“The girls had been practicing since before school let out and right up until it was time to leave for camp,” coach Afton Vieth said. “They really put a lot of time and effort in at practice and that truly showed in their performances. I couldn’t be more proud of the awards they received. They deserved each one of them and I am looking forward to watching these girls in the fall on the sidelines”.

Memorial services for Rhonda Dishman Pulte, 66, of Gainesville, are pending with Geo. J. Carroll & Son Funeral Home. Mrs. Pulte passed away April 5, 2020 in Denton. You may sign the online register at www.geojcarroll.com.

Aleta Morgan Scribner, 100, of Gainesville, passed away April 4, 2020 in Gainesville. Aleta was born October 8, 1919 in Fort Towson, OK to Joseph Haney and Sara Annie (Miller) Alexander. She owned her own shop as a beauty operator for many years. Mrs. Scribner was also a member of Commerce S…