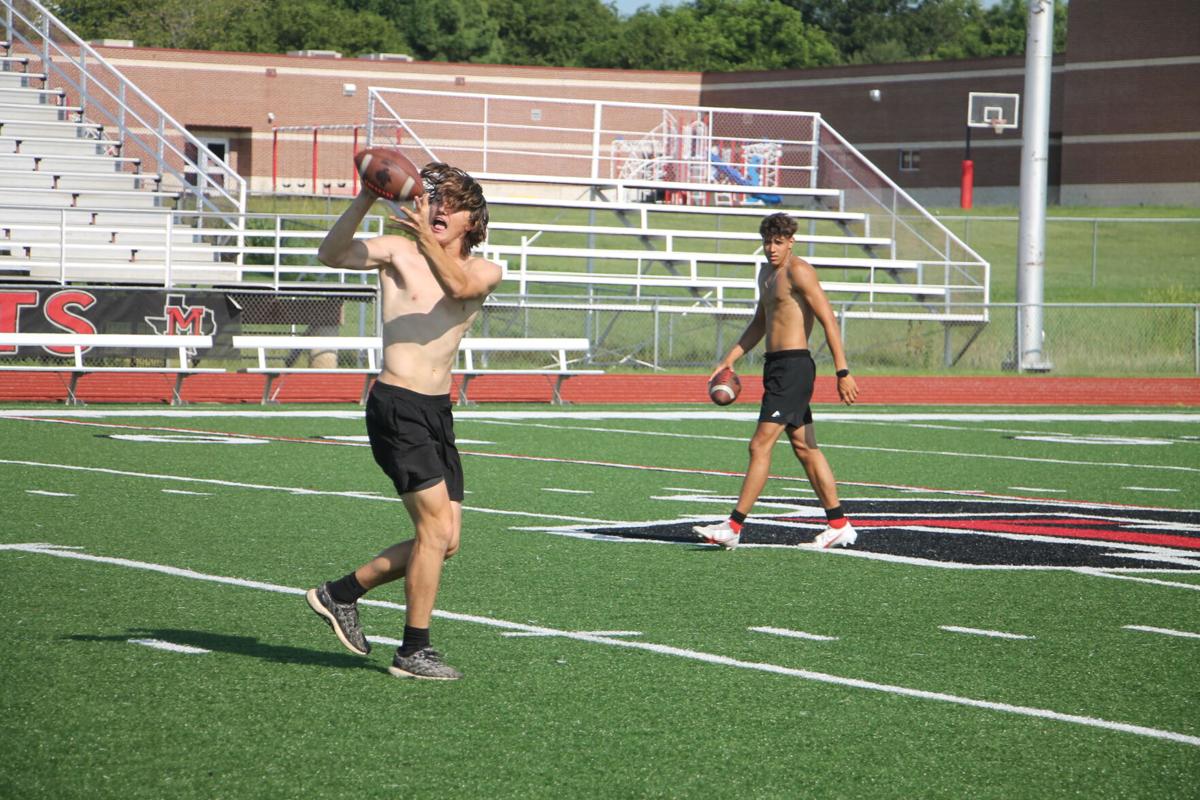 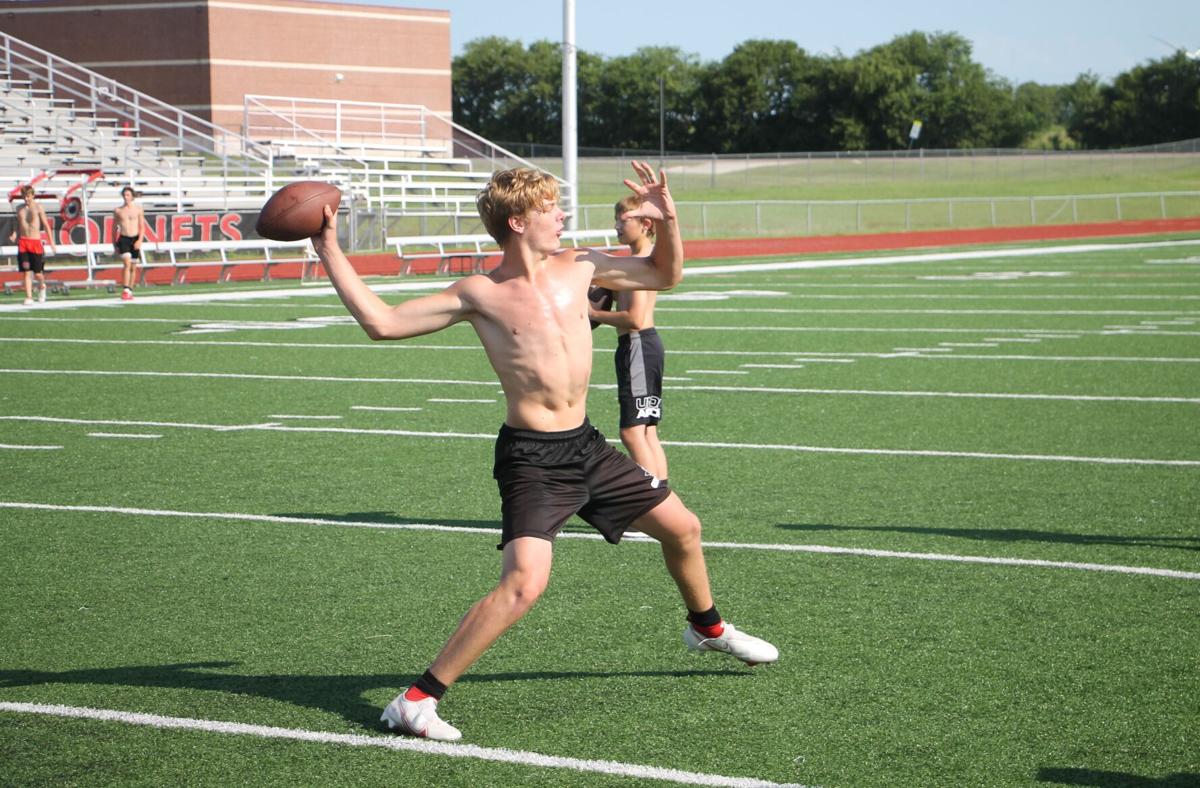 Eli Saucer throws a pass as he and other quarterbacks practice with receivers. 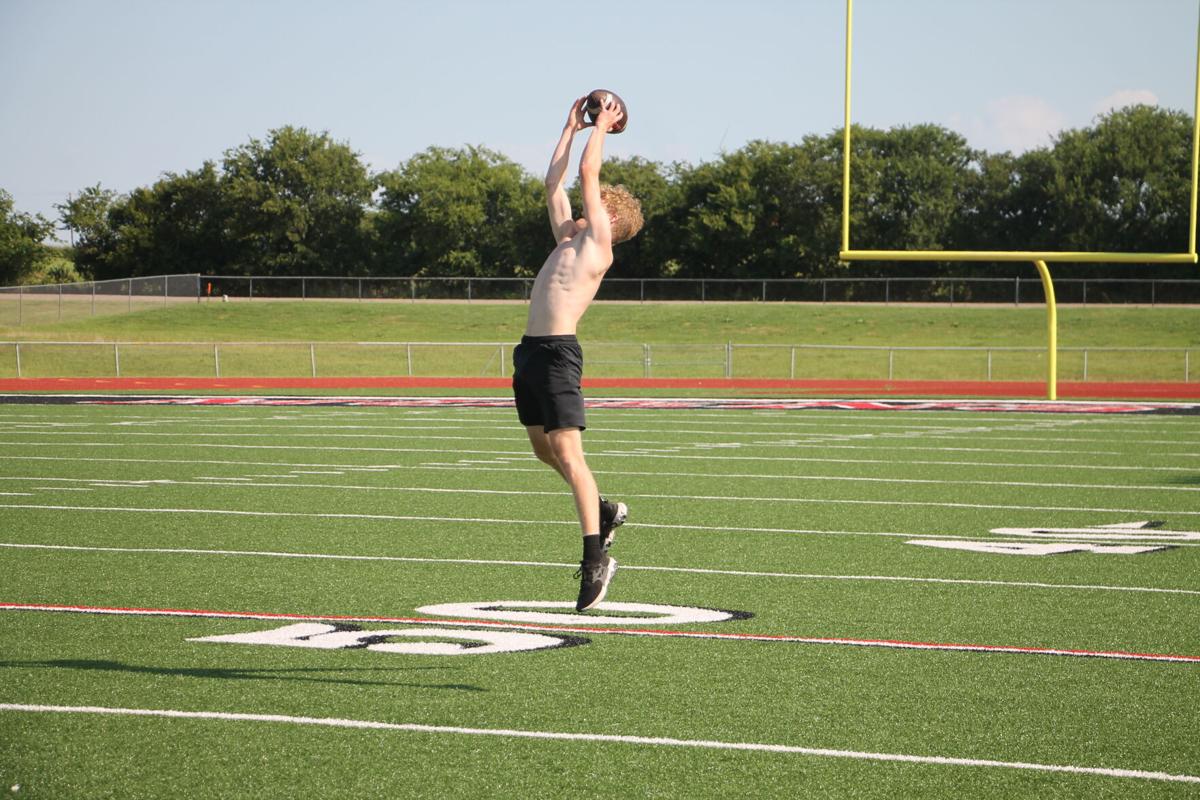 Eli Saucer throws a pass as he and other quarterbacks practice with receivers.

The Muenster Hornets wrapped up summer workouts this week after having record numbers of participants.

Football coach and athletic director Brady Carney said he had more athletes come out this summer than ever.

“My past 11 seasons, we just didn’t have as many boys,” Carney said. “Percentage-wise, we were still real high. But this year, number-wise, we’ve got a lot of boys. Averaging 80-90 where, years past, we’re anywhere from 50-60. Going into the season, I think I’ve got 55 high school football players. That’s the most numbers I’ve ever had. Usually, we’re in the low 40s to upper 30s, so numbers have been great.”

Muenster ISD is growing, and with it, the athletic programs. Carney said in two years, Muenster has gone from a graduating class of around 26 to 42. If the school keeps growing, a move up from Class 2A Division 2 to Division 1 could be in the future, though he said it wouldn’t happen for at least 3-4 years.

Carney said participation is crucial because summer work is a big part of preparing for the season.

“This is where we build our foundation,” Carney said. “I think our kids, where we’ve got 90 percent, 95 percent that are here and working towards that, that’s where we lay our foundation, and the guys know that. That’s what carries us into December. For us, this is what makes us who we are.”

Carney said participation from upperclassmen has been even better. He estimated out of 28 junior and senior varsity players, there have been three times this summer a player has missed a workout. Each of those times, the player let him know why in advance.

The upperclassmen play a big role in Muenster. They are expected to lead by example and show the younger kids what they need to be doing.

Junior Ty Sanders said he learned a lot from members of the 2017 state championship team and is trying to pass on that knowledge to the underclassmen and middle schoolers.

“Whenever I was a freshman, the state winning team, they were my seniors,” Sanders said. “We always had high expectations growing up. We kind of know how to put in the work, and then we have to tell everyone below us, ‘Focus up. Get ready to play.’”

Carney said he splits up the upperclassmen during the summer. He has the seniors work with the 10th and eighth graders, while the juniors go with the ninth and seventh graders. The upperclassmen are expected to show the younger kids how to work hard and how things are done in Muenster.

This past week was the last week of summer workouts for the Hornets. They worked five-straight weeks throughout June, took off the week of July 4, then finished this week.

Most of that time was spent either in the weight room or working on agility. Carney said Muenster does not spend as much time working on sport-specific skills as many other schools.

Carney said he is proud of the commitment his athletes have shown this summer. There are always high expectations at Muenster, but he said he thinks the Hornets have done everything they can to prepare for another great season.

The world lost a beloved mother. Barbara Offord Zackery passed away on June 15, 2021, in Gainesville, Texas. She was born July 18, 1941 in Valley View, Texas to Bill and Mary Rozella Offord. Barbara was proud of her seven children and several other children she had raised as her own through …