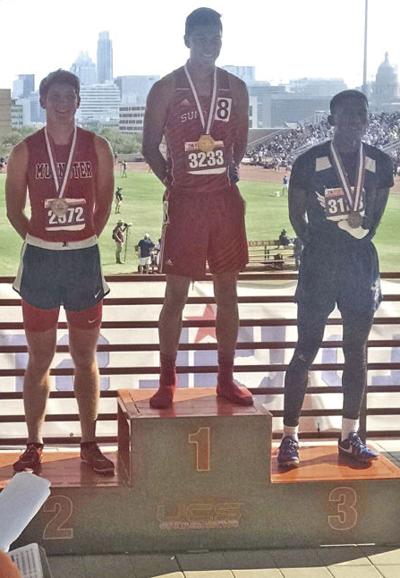 When Muenster’s Andrew Stoffels approached the medal stand at the Class 2A state track meet at Mike A. Myers Stadium in Austin last month, it was a bittersweet moment for him in multiple ways.

Stoffels had just earned second place in the 800-meter run, good for a silver medal, but he was also holding back sickness.

“I was leading the race and I was really pumped,” Stoffels said. “I thought I was going to get first. I was just glad to be in a medal position in the top three honestly. Whenever I got to the podium, I was a little sick and I barely made it up there. I was throwing up a little bit before, but I was proud when I got that medal and got that picture.”

Feeling sick after running is something Stoffels has grown accustomed to.

“Whenever it’s this time of year, I throw up after every 800 I do,” Stoffels said. “I haven’t figured out why. I guess I just push myself so hard that I have no energy left. I really don’t get too nervous before the meet. There’s nothing I can do about it.”

Still, the podium was a culmination of his countless hours of training and four years of high school track.

Stoffels said he would never forget stepping up to the podium.

“Getting that medal around my neck was really great,” Stoffels said. “Seeing all the people supporting me and having my name announced over the loud speaker in front of the thousands of people was really something.”

As far as the race was concerned, it didn’t go exactly to plan.

Stoffels was leading the entire race until the very end he was caught by Sundown’s Steven Quintanilla.

“It came down to a sprint and I didn’t have enough left,” Stoffels said. “He was drafting behind me the whole time. We were running against the wind. I could feel the breeze hitting me, so he started drafting behind me. I knew he was trying to save some for the end.”

Stoffels chalked his shortcomings to a slow first lap. He was aiming for a 56-56 second lap, but settled for a 57-second lap.

“That was a little slow for me,” Stoffels said. “The second lap was really slow for me. It wasn’t my best race. The heat got to me and it warmed up a lot. I didn’t really get enough water, but there isn’t any excuse for that.”

Head track coach Brady Carney said he was proud of how Stoffels worked through the season.

“For me, he’s done everything I’ve ever asked him to do as an athlete,” Carney said. “Kids don’t like to run too much and they whine about the workouts. Andrew was never like that. He showed up everyday and worked as hard as I wanted him to work. He looked as relaxed and ready to run as any runner I’ve ever had.”

After finishing in ninth place at the state meet last year, Carney said he felt like Stoffels' experience paid off for him this year and that making the medal stand was as good as it gets.

For Stoffels, he heads to college at Texas A&M University to major in engineering and he’ll do so feeling as if he left everything on the track.

“I didn’t run very well at all to start the year, but then I got better during area and regionals,” Stoffels said. “I felt like I had a good year and it was definitely better than all my other ones. I had that motivation to run well my last year. Considering I got last place last year, this is something I’ll definitely hold on for forever.”

Randy Wayne Garrett was born Nov. 8, 1953 in Gainesville to Kenneth and Emalene Garrett. Randy married Benita Faltermier and they enjoyed many years together until they had to separate to live with their respective families for medical care. Randy worked at Joe Walter Sheltered Workshop and …